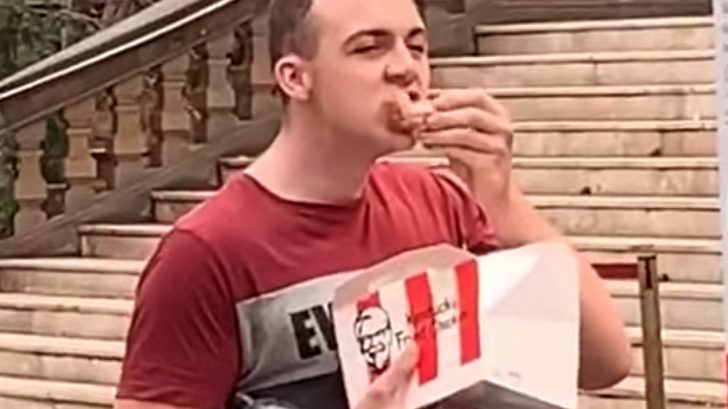 A protest right outside of Sydney’s Town Hall held by a vegan activist group called Anonymous for the Voiceless was trolled the other day by a man standing in front of them eating a box of KFC chicken.

The protesters were holding screens showing disturbing footage of animals being slaughtered and standing silently as the video revealed the reality of what goes on behind closed doors in the meat industry.

Participating In The Protest

Animal Rights Activism Sydney posted a Facebook event earlier in the week letting people know that anyone who supported Anonymous for the Voiceless and the cause could show up and would be given “literature, equipment and guidance” on how to participate in the protest.

Some were wearing blindfolds, some were wearing the Guy Fawkes masks, while others just wore black t-shirts. Everyone was standing around watching the video while this unknown man walked up and started eating his box chicken.

It’s not clear on who exactly took the video, whether it was his friends or just a random person filming the guy, but the video was posted to TikTok and quickly went viral. Some people walking past the guy laughed at the fact that he was eating his chicken in front of them while others were not amused.

Watch The Protest Video Below

This man has won the hearts of meat lovers everywhere after standing in front of a vegan protest in Sydney, eating KFC.