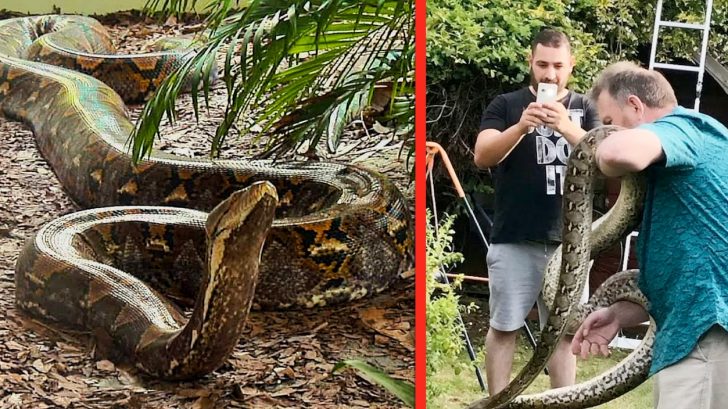 After nearly a week of freedom and running amok in this town, authorities have captured this dangerous snake who has had folks on edge day-in and day-out.

Previously, this Reticulated Python had been missing since June 30th, 2019 in Cambridge, England and police had warned people to keep their children and pets indoors for safety reasons until they could secure the snake once again.

Reticulated pythons are known to feast on humans and just a year ago in June 2018, a vegetable farmer in Indonesia went missing. Her body was found completely intact inside the stomach of a 23-foot reticulated python.

The snake had a massive bulge in its stomach and villagers carried the snake into town and cut open – which revealed the woman had been swallowed. Video of the dissection was posted online.

According to CambridgeshireLive, the reptile’s owners were found, but the snake had yet to be caught. These type of snakes are not poisonous but can wrap around a person and cause harm or death by squeezing limbs or other body parts.

If a reticulated python wanted to harm a person, it would first bite and then constrict the person, causing death by suffocation.

Expert Geraint Hopkins told CambridgeshireLive that it is “completely irresponsible to own a snake like a reticulated python.” A snake which is native to many Asian countries.

“The snake would definitely be a threat to smaller animals – if a child or elderly person stepped on it they would get a really nasty bite and it could really cause some damage. I have to ask, how in the heck did it get out of the house. It is the owners’ responsibility to keep it secure. I’ve never lost a snake.”

“Snakes are not stupid, if they can find a way to get out, then they will.”

Now, according to Metro UK, the snake was found and the story behind its escape was finally told in full.

Firstly, the snake apparently was intentionally released from a second story window after its owner and his roommate got into an argument. The roommate let the snake out as a sick form of revenge.

A neighbor named Chris Antony said she was the first to spot the snake, but her husband didn’t believe her at first.

Apparently, the birds were kind of making a lot of noise around near where the snake was found and that helped alert another neighbor to start poking around in the bushes near the tree.

We are thankful that this story has a happy ending and nobody or pets were harmed while this reptile was loose in town.

Watch the video below about a man who wore a “snake-proof suit” and got eaten alive by an Anaconda.