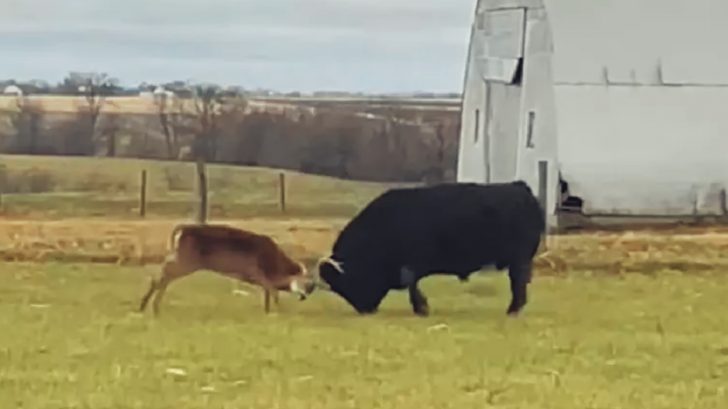 “Bucks are still fired up in central Illinois,” Hunter wrote on Facebook.

The Meat Eater reported that Hunter was out driving around scouting for deer like he’s normally been doing every day since November started. As he was driving past a bullpen he noticed a buck in there trying to square up with it.

Being an outdoorsman, Hunter’s seen many bucks before running on the property but never has he seen a buck challenge a full-grown bull. The video showed the buck walking confidently up to the bull as he lowered his head to headbutt his competitor.

At first, the bull stood his ground, but the tenacious buck doubled down its stance and charged towards the bull. The buck clearly was the aggressor in the duel and the bull eventually turned around and began to walk away.

“It’s stunning that a whitetail had the gusto to tangle with a one-ton bull. It’s even more remarkable that he basically won the bout,” The Meat Eater said about the altercation.

Watch The Buck VS Bull Video Below