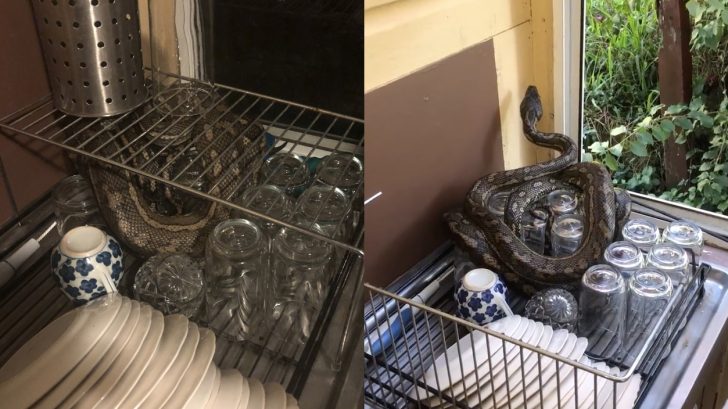 Keith Williams, chairman of Ballina Shire woke up early in the morning before the sun was up and began cleaning up the kitchen when he stumbled upon a massive snake.

Can’t believe I cleared part of the dish rack before I even noticed.

OK, I’d just got up and was waiting for coffee. But still… pic.twitter.com/gxrAkzTuuV

‘I can’t believe I cleared part of the dish rack before I even noticed. ‘OK, I’d just got up and was waiting for coffee. But still…,’ Keith wrote on Twitter.

A little while later when the sun came out, he removed a rack that was over it and lifted up a window behind it in hopes it would slither outside on its own. Eventually, the snake took the hint and began to slither out of its resting spot and back outside.

Update: Lovely python has made its way outside and all is returning to normal.

Now if you’ll excuse me, I’ve got a lot of washing up to redo.

Keith filmed the wild encounter and shared it on Twitter and the comments on it started rolling in.

“Holy crap – I’m not surprised you didn’t notice it – I had to look twice at your photo – btw does the snake take its coffee black or white?” one commenter asked.

“I haven’t asked. The British part of me is ashamed I haven’t immediately offered a visitor a cuppa,” Mr. Williams replied.

“Send it down to my place. I don’t have a dishwasher but it’s an all-you-can-eat mouse situation,” another user added.

Keith lives in Australia in a place called Nyangbul, Bundjalung, New South Wales where snakes of all kinds, venomous and non-venomous, are known to roam. Incidents like this are not uncommon where he lives and Keith even shared footage of another time he had a wild snake encounter.

Don’t think I’ve ever been shared by Twitter before.