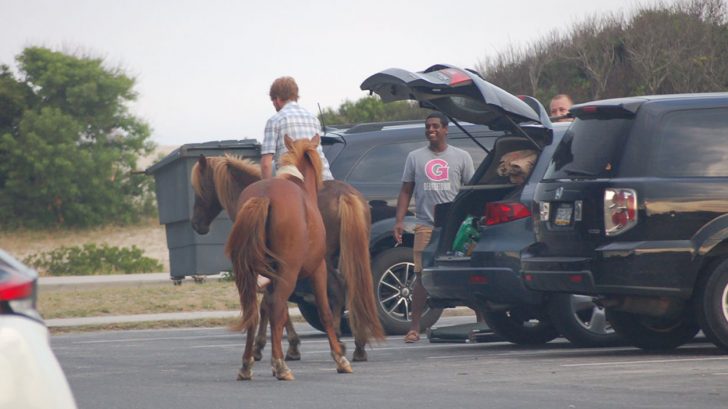 Over the 2020 Fourth of July weekend, one individual has been charged after he mounted and rode one of the horses at Assateague State Park in Maryland.

Assateague State Park is Maryland’s only oceanfront park. It is located on Assateague Island, a barrier island bordered by the Atlantic Ocean on the east and the Sinepuxent Bay on the west. Two miles of ocean beaches and marsh areas have a variety of wildlife, including deer, waterfowl and most famously, feral horses. These wild horses have resided there since the 1600’s and are protected by the government. A combined total of over 300 of these horses roam wild in both Maryland and Virginia.

According to the MD Coast Dispatch, on July 1, 2020, a frequent visitor to Assateague came across a group of young men petting two of the wild stallions that had approached them. The concerned visitor advised them that the horses are wild and can bite and kick. There is a state-regulated rule requiring people to keep a 40-foot distance from the horses, to which the visitor informed the group. One person in the group reportedly said he worked on a ranch and knew how to handle horses. The visitor left the area and returned a short time later to find the ranch hand riding on the back of one of the stallions.

Posted by People of the Ocean City Boardwalk on Thursday, July 2, 2020

The visitor immediately called park rangers and they arrived quickly, but by then the group of young people had left the area. The witness was able to send pictures of the incident along with pictures of the vehicle’s license plate to park rangers. The National Park Service officials confirmed the incident and were able to locate the individual, who has been charged for violating the Wildlife Protection Code which prohibits the feeding, touching, teasing, frightening, or intentional disturbing of the horses. These horses are protected by law and visitors are only allowed to observe from a distance.

For a closer look at the beautiful horses roaming Assateague Island, watch the video below.