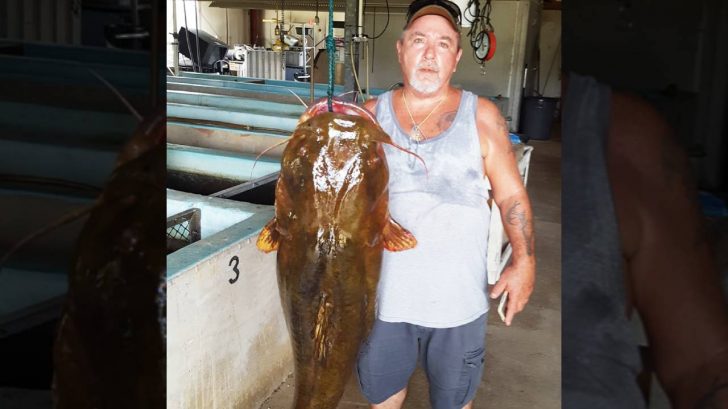 A native Floridian named Lavon Nowling was fishing in his usual spot using his normal rod and the live bait he uses every time he’s fished, but this time he made a once-in-a-lifetime catch, according to Fox 10.

Nowling was fishing in Santa Rosa County’s Yellow River, which he has done for “as long as I can remember,” he says.

Admitting that he’s been fishing since he could hold a rod as a young boy, he also said, “I’ve caught some good ones before this fish, but none of them were more than 54 pounds.”

So, anything more than 54 pounds would be highly impressive to the angler, but 16 pounds heavier than his largest catch is not something you ever think is really possible. But on August 31, 2020, Nowling did the unthinkable – he reeled in a 70-pound flathead catfish.

Clearly, it became his largest catch and after an official weigh in by biologists on a certified scale, it became the new state record for flathead catfish at 69.9 pounds, measuring 48.5 inches long with a girth of 38.25 inches.

“A state record catch is a once in a lifetime achievement for an angler,” Jon Fury, Florida Fish and Wildlife Conservation Commission’s director for the Division of Freshwater Fisheries Management, said. “We are pleased to award this state record to Mr. Nowling.”

Check out his big catch in the photo below!

Posted by MyFWC Florida Fish and Wildlife on Monday, August 31, 2020