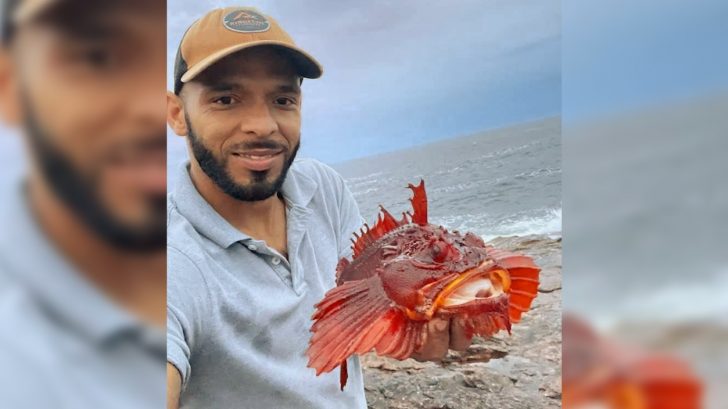 Tiago Oliveira was fishing off the coast of Gloucester, Massachusetts when he reeled in something truly bizarre, a fish that normally lives deep in the ocean and most people never ever get to see.

“Fishing in Gloucester today. Look what I got. I have no idea what it is,” Oliveira wrote on Facebook.

Barbara Bailey with the animal research team at the New England Aquarium has identified the fish and said that it’s a sea raven, or more scientifically known as the Hemitripterus americanus.

The sea raven is weird looking fish that has a body structure that’s different than other fish. They grow anywhere from 18–20 inches long but the largest one ever recorded was 25 inches long.

What’s probably the most distinctive feature of the fish is the fleshy tabs that start along the top of its head and goes all the way down to its dorsal fin.

The fish are usually red, purple, yellow, or brown or a mix of those colors and have an underbelly that’s always pale. They are mainly found on the Atlantic coast of North America anywhere from six to 300 feet deep in the water.

“They are present throughout the water column and are considered voracious feeders. Their diet includes a variety of mollusks, crustaceans and fish. Sea ravens will take almost any bait. They are edible, but few are kept because of their ugly appearance,” Maine.gov wrote.

Watch Footage Of A Wild Sea Raven Below