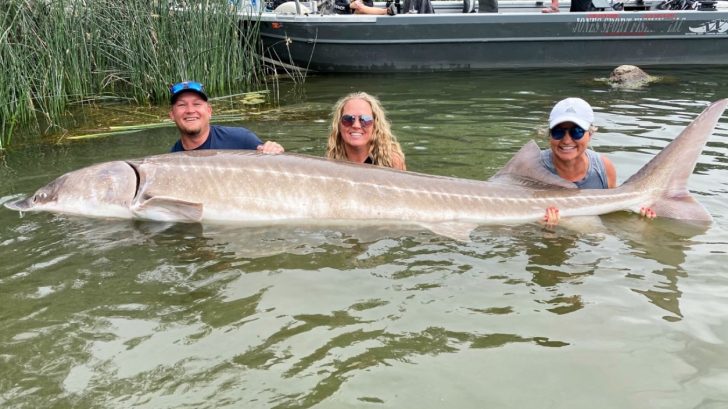 According to the Idaho Fish and Game, a man from Utah just caught a massive 10-foot-long white sturgeon out of the C.J. Strike Reservoir this month (Aug).

A photo shows Greg Poulsen and his wife Angie Poulsen (left, middle) and Wendy Guess (right) of Eagle Mountain, Utah holding up the 124-inch fish smiling from ear to ear.

Idaho Fish and Game shared the picture on their website congratulating them on landing the river monster. They noted that the previous record was 119.5 inches set in 2019 by Rusty Peterson.

The state said Greg and Angie from Eagle Mountain, Utah traveled all the way to Idaho, hoping to hook onto one of North America’s largest freshwater fish, the white sturgeon, and they did.

Idaho Fish and Game said, “While fishing on C.J. Strike Reservoir on Aug. 5, Greg Poulsen got his chance and hooked into a big one! Greg ultimately landed the 10-foot 4-inch monster sturgeon, and set the hook on a new state record in the process,”

Sturgeon around C.J. Strike Reservoir can take 10-15 years to reach sexual maturity so they are strictly held to a catch-and-release rule to protect the native species so they not be removed from the water while handling them.

Greg and Angie released the fish back into the Reservoir to live out the rest of its days.