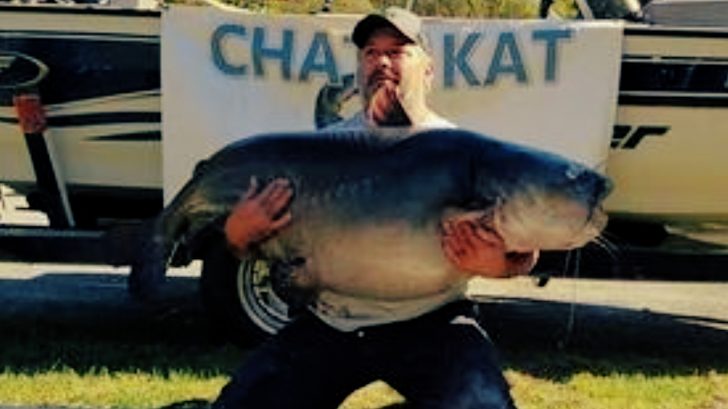 Tim Trone from Havana, Florida reeled in the new Georgia state record for a blue catfish when he hooked onto a 110lb 6oz, 58″ long, and 42″ girth of a monster catfish.

“Congrats to you Tim – that is a whopper of a tale to tell!” Wildlife Resources Division wrote on Facebook.

The big blue beast was caught in the Chattahoochee River in Stewart County on October 17th, 2020. Tim completely shattered the previous record by 18 pounds and did it during the Chatt Kat Catfish Tournament that was taking place in the Florence Marina, which is at the upper end of Lake Eufaula.

He was fishing in a deep corner, in about 40 feet of water with a Santee rig and cut bream at 11:15am when he hooked onto the fish. He said the fish bit like a big turtle, not hard, just a little bump in the line.

“When she went to pull down, I started reeling up. When I reeled, the line just came right up. She never fought. She reeled like a 100-lb. floating log, no fight,” Tim told Gon. “When the fish hit the surface, I saw the tail and thought to myself that I had the big, 50-lb fish I had been looking for.”

Tim pulled the fish into the boat and took it to get officially weighed. He was blown away by the sheer size of the catfish but when he got the news that he broke the state record, that really made him excited.

Fishing on any given day is a good day. But angler Tim Trone of Havana FL had a GREAT day when he caught the new Georgia…