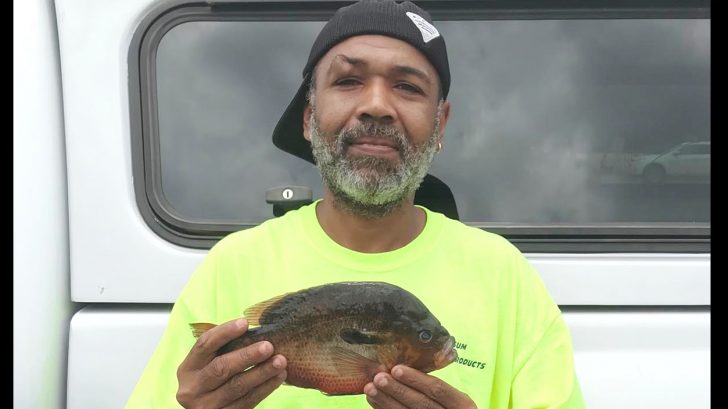 A man by the name of Alphonso Jackson will go down in the North Carolina record books.

On June 27, the North Carolina Wildlife Resources Commission released a press release stating that Jackson broke a 36-year-old freshwater fish state record on June 10 when he reeled in a fish that weighed two pounds, and one ounce.

When we first heard this news, we thought it was for smallest fish caught in the area…but we were wrong.

Jackson caught a redbreast sunfish, which average around 1 pound in weight and 11 cm in length, which meant that his two-pound, one-ounce catch was massive for that species of fish.

The previous record was held by Ronald Stanley, who reeled in a one-pound, 12-ounce catch on May 29, 1983 in Big Swamp, which is in Bladen County, North Carolina.

Jackson caught his record-breaking fish while he was out with his three children, aged 23, 18, and 17.

“We started fishing in a pond but weren’t having any luck, so I said to my kids, ‘Let’s go back to where I learned how to fish’ and this is what we caught,” Jackson told the NCWRC. “I’d like to thank my daddy for teaching me how to catch fish and where to catch fish.”

The NCWRC website says to qualify for a North Carolina Freshwater Fish State Record, “anglers must have caught the fish by rod and reel or cane pole; have the fish weighed on a scale certified by the N.C. Department of Agriculture, witnessed by one observer; have the fish identified by a fisheries biologist from the Commission; and submit an application with a full, side-view photo of the fish.”

Johnson said he caught the fish with a cricket bait, and had it weighed on a certified scale at Safeway market in his hometown of Maxton.

What an impressive catch!