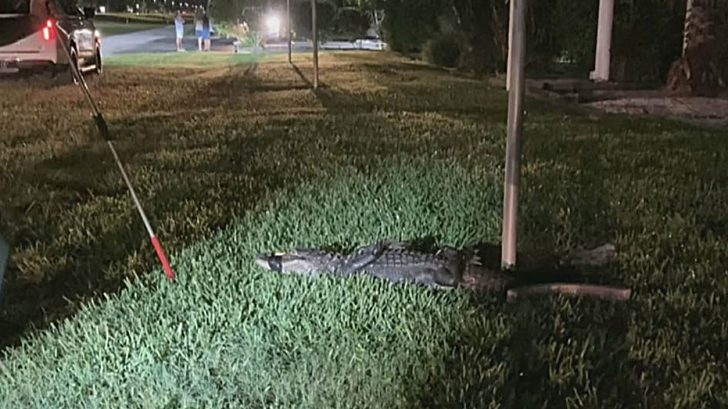 According to the Sarasota County Sheriff’s Office, a man was walking outside the Warm Mineral Springs Motel in North Port when he was bitten in the leg by an alligator.

The man told police that he saw the dark figure moving along the bushes he was walking past in the early hours of the morning and thought it was a dog on a long leash.

Not realizing it was a dangerous wild predator, he walked right beside it and that’s when it lunged out and attacked him.

The alligator went straight for him and bit him on the leg, ripping out a piece of flesh, and that’s when he realized it wasn’t a dog on a leash at all…it was a mean, green, 7ft-long reptile.

“He stated the figure appeared to look like a dog with a long leash, which is why he wasn’t hesitant to move out of the way,” a sheriff’s office said, according to WTSP.

Fortunately, the man was able to get away from the gator and he found a deputy on duty who was responding to another nearby call, and the deputy called for emergency personnel to come help the man.

The man was taken to the hospital where he was said to have non-life-threatening injuries. He was later released and is said to have a full recovery.

Sarasota County Sheriff’s spokesman Douglas Johnson said that a sheriff’s sergeant was able to capture the alligator and hold it there until a Florida Fish and Wildlife Conservation Commission trapper could get there and remove the animal.

Once it was caught, the gator was transported alive to Townsend Farms where it will be kept for the time being. More on the gator attack below!

Video News Report On The Incident Below