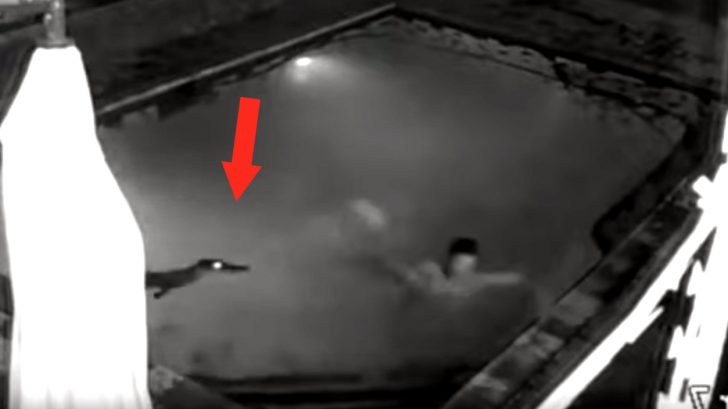 A couple swimming in a pool got the unexpected surprise of a lifetime when a gator found its way into the pool with them – and decided they would make a perfect snack.

The pair were in Zimbabwe just having a relaxing night when home security footage captured the moment of terror when this six-foot-long gator prowled around the water’s edge and then attacked the two.

While the surprise assault was shocking enough, this poor woman found herself not only surprised but let down when her boyfriend literally abandoned her at the first sight of danger.

Watch carefully in the video and you will see the smaller gator (perhaps even a caiman) sneak up on the couple who were canoodling in the corner.

Next, as if out of nowhere, the reptile lurches forward with a fierce drive to get to the people. In a split second, you can see the man scrambling to escape the pool as quick as possible – while leaving his girlfriend behind.

She’s stuck in the pool and scrambles to get to the other side while the gator quickly moves toward her and bites her.

Luckily another bystander came to her rescue and distracted the beast while she was able to get out of the pool to safety.

She received minor bites and scratches but was expected to be okay.

Watch this harrowing ordeal below…