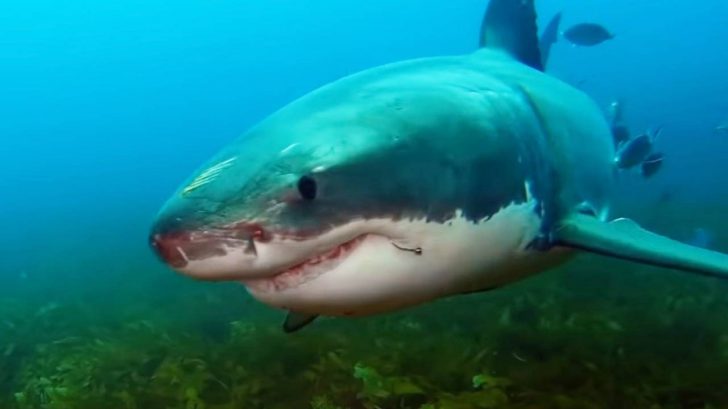 #SharkWeek kicks off TONIGHT at 8p on @Discovery and @discoveryplus!

The Jackass guys are known for their three-season show on MTV where they performed extreme and crazy stunts and pranks on each other. The popularity of the show allowed them to make four different movies, with the most recent one being released on October 22, 2021.

We’re back! A bit older and a lot grayer, but definitely not the wiser. Catch the #JackassForever trailer debut online Tuesday, July 20, follow our new Instagram account, and we’ll see y’all on Oct 22. https://t.co/i8TqOcnzyW pic.twitter.com/Fr6BcMOQ0w

The Jackass guys who participated in the Shark Week special were Steve-O, Chris Pontius, Sean McInerney (whose nickname is “Poopies”), and Johnny Knoxville.

The rambunctious crew had already performed several stunts that went off without a hitch, but of course they wanted to keep pushing the envelope. “Poopies” decided to try and pull off a stunt that was inspired by the Happy Days scene where Fonzie jumps over a shark-filled pool on jet skis.

For his stunt, Poopies was on a wakeboard and didn’t get much air off of the jump.

Poopies launching over a pit of ten hungry sharks at full speed… don't try this at home.? ? #SharkWeek @JoshuaGates pic.twitter.com/iov1O1RnP5

After crashing in the water, sharks immediately surrounded him and one of them bit his hand! Rescue crews were close by and able to get was able to get him back to the boat where he was treated for his bloody injuries.

Steve-O, who has been bitten by a shark before, was unfazed, saying, “This was only one bite in one spot? And he’s not missing anything?”

Poopies knew there was a chance he could get bitten, and seems to be in good spirits after the scary bite.

“I knew there was a chance I was gonna get bit by a shark, but I didn’t think it was gonna happen,” he said. “I don’t blame the sharks at all. I mean, I was in their living room, and it was dinnertime.”

You can watch the Jackass Shark Week special on Discovery+.