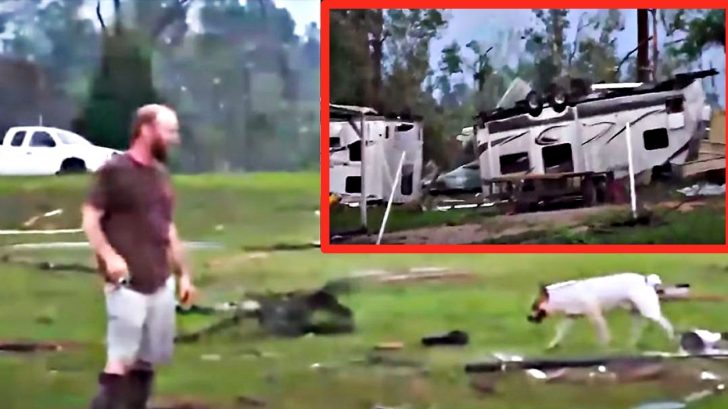 Wednesday evening, April 22 a deadly tornado dropped down in Polk County, Texas – an area just north of Houston. The tornado warning was issued to go into effect at about 5:45 p.m. and less than 30 minutes later, damage reports started flooding in.

One particular resident, Pobla Gallier was interviewed by KHOU 11 News. As the camera pans across her property you can see her house nearly chopped in half by the tornado. She tells the reporter,

“See that travel trailer upside down? It was under a carport, my son was staying in it. It flipped twice and landed on the top.”

Even though the trailer home was destroyed, both her son and his dog were miraculously unharmed.

Others unfortunately, weren’t so lucky. It was reported  by Polk County officials that there were at least 3 dead, about 30 injured, 46 homes were destroyed and 291 homes impacted.

According to an article by KHOU 11, the storm system tracked more than 200 miles across multiple states over a six-hour period on Wednesday. The AP News reported the same storm system led to at least four other deaths outside of Texas, including a trailer factory worker whose body was found a quarter mile from his workplace in Marshall County, Oklahoma. A second death was also reported in that same county. Also, a woman was killed on a bridge in Woodworth, Louisiana, and another man died in Louisiana when he went out in the storm to retrieve a trash can.

Watch a video of the tornado below, captured by a Polk County resident.

Viewer video shared by Paul C. shows the tornado that ripped through Polk County near Lake Livingston. This was shot from the Lake Livingston / Onalaska KOA lakefront site.