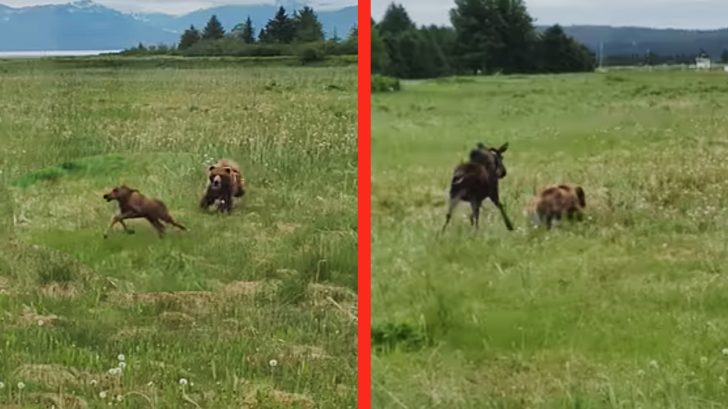 Moose are big animals and while many like to think of them as gentle giants of the forest – they actually can be incredibly aggressive. And that’s exactly what this brown bear learned…the hard way.

One of the biggest rules of nature is that if you stumble upon a baby, you know that the mama isn’t too far behind. Experts always say to leave the area immediately because if the mama thinks her baby is threatened by you – she usually will do whatever it takes to save her baby…no matter what.

In this rare video caught by a man named Matt Cahill, the Alaskan fields just outside of his house often feature an incredible amount of wildlife, but nothing quite like this encounter between a young brown bear and a very angry mother moose.

The moose cow (mother) is wearing a blue collar that’s generally used by the US Fish & Wildlife Service to track and study animals.

As she and her baby come trotting into view, just a second or two later a brown bear is hot on the heels of her little one – and once she realizes it, the chase is on!

Several times during the video, you might think she’s given up – but she seriously is pissed off at this bear and isn’t afraid to fight him!

Check the whole thing out below!