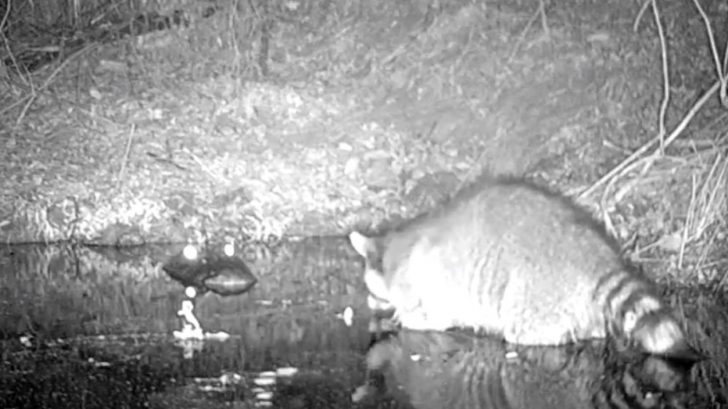 In McCurtain County, Oklahoma a trail camera overlooking an alligator nesting spot recorded a mama gator defending her babies against a hungry raccoon on the hunt to eat them.

The footage was captured during the night on Saturday, April 4th, 2020 at the Red Slough Wildlife Management Area, a wildlife refuge in Oklahoma. It showed the raccoon walking in the water near the shore and it appeared to be trying to catch a baby gator. However, the gator’s mama was hiding below the surface of the water with only its eyes poking out, protectively watching.

The raccoon didn’t seem to be aware the mama was there until she rose up out of the water and lunged at the raccoon. The raccoon jumped back in fear to get away from the dangerous mouthful of teeth coming towards it.

The mama gator continued to stand guard as the curious raccoon switched positions and tried to approach the mama’s den again, this time from behind. However, the gator was fully aware of the raccoon’s plan to get its hands on her babies and she leaped towards him again.

The raccoon soon realized that this den was under the full protection of the mama gator and if he didn’t get out of there he was the one who was going to end up on the menu. The raccoon eventually tucked-tail and ran off into the night.

This is not the first time the trail camera has captured the gator defending her nest. In the past months the gator fought off an opossum and a group of six otters looking to feast on her young. None were successful.

The Red Slough Wildlife Management set up the cameras to monitor the behavior of 30 gators who live in the area. Dr. Jared Wood, director of the SWAU Dinosaur Museum and Research Center in Texas says he’s been watching them since 2009.

“We want to figure out why and when they choose to defend or move their young. Furthermore, we want to better understand how mother alligators respond to different species of predators, and how time of day, temperature, etc. influence these interactions,” Star Telegram reported Dr.Wood saying.

Watch Mama Gator Protect Her Babies In The Video Below