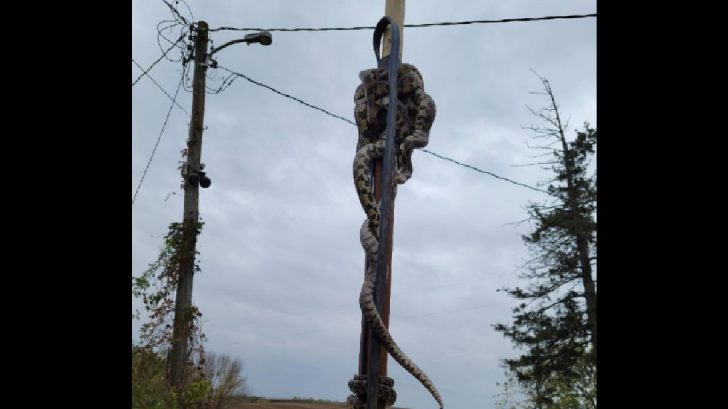 An Iowa maintenance man got a cruel surprise while working on an improperly sealed well in Iowa.

The man, who worked for Mort’s Water Company in Latimer, Iowa, was checking on a well earlier this month when he made an unnerving discovery. When he pull the pipe from the well, he also pulled up 8-9 bull snakes that were coiled around it.

“This is one of the main reasons why the top of your well casing should be properly sealed. Those are 8 – 9 bull snakes wrapped around pump drop pipe pulled out of a well. They got down the well through the top of a poorly sealed well casing,” a Facebook post from the water company read.

Bull snakes are often mistaken for rattlesnakes, according to experts. They mimic the rattlers’ strike stance, hissing sound, aggression, and movement of its tail, often leading to the bull snake being killed by humans. Fortunately, bull snakes are non-venomous and kills its prey by constriction.

The bull snake is also one of the largest snake species in the United States with an average length of 8 feet long! Imagine what 8 or 9 of those look like together to get an idea of what the Iowa maintenance man came face to face with.