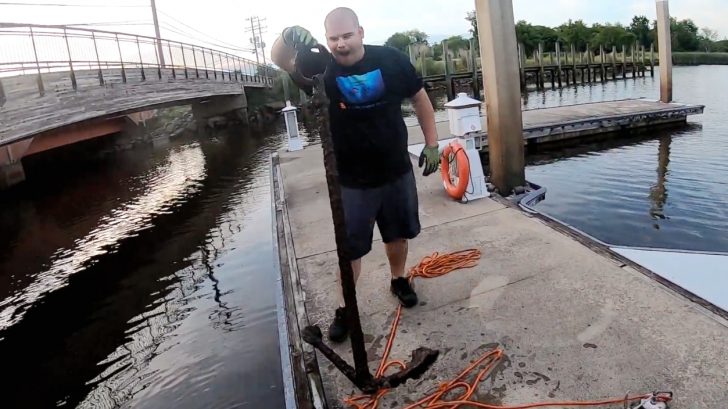 Jacob Parr from Chesapeake, Virginia pulled up a pre-Civil War anchor while he was magnet fishing in a Suffolk waterway.

Jacob said that it happened on June 13th as he was throwing his magnet in the Nansemond River beside Constant’s Wharf Public Park and Marina in Suffolk. He brought his camera and girlfriend to help record a video for his YouTube channel Tidewater Magnet Thrower and captured everything on film.

In the video, he throws a powerful magnet multiple times over the dock and drags it along the bottom in hopes that he’ll pull up something interesting for his video. Normally he gets some old bike frame or rusted nails sticking to the magnet, but this time, Jacob latched onto something a lot more valuable.

“What kind of freaking pirate ship is this off of?” Jacob jokingly said in the video as he pulled the anchor up out of the water.

He took it home and placed it in a kiddy pool in his backyard to preserve it while he contacted Brendan Burke, an underwater archaeologist for the Virginia Department of Historic Resources.

Brendan said that the style of this anchor is very common to the 18th and 19th centuries but it’s hard to narrow down an exact time frame or year. Jacob plans to hold onto the artifact until he can either sell it or donate it to a museum.