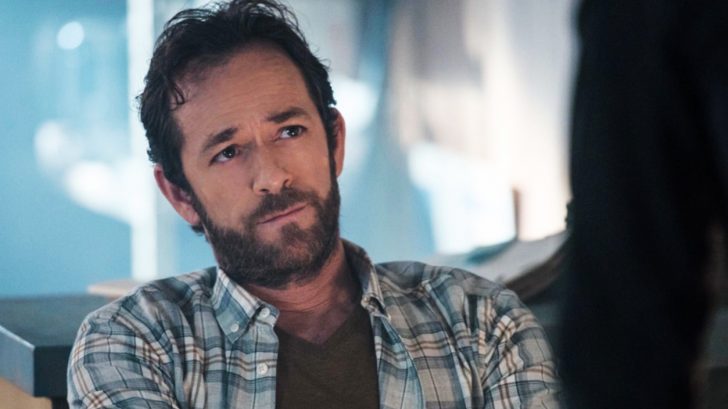 After watching him on television and in movies over the past 37 years, fans will have to bid their final farewell to the beloved actor as he makes his final appearance on TV screens throughout the world…

Luke Perry, who is known for his work on the smash-hit series Beverly Hills, 90210, western biopic 8 Seconds, and most recently – Riverdale.

The 52-year-old actor held a number of other roles throughout the years and made appearances in shows like Law & Order: SVU, Oz, Will & Grace, Body Of Proof, and many others. In total, Perry is credited in more than 90 different projects.

One of his most-endeared performances was that of Lane Frost in the riveting biographical movie about his life 8 Seconds. From that, he has made an indelible mark on the world of westerns and country folk.

Tragically, in late February 2019, Perry was hospitalized after suffering from a major stroke at his home in Sherman Hills, California. Less than a week later, Perry passed away at the hospital in Burbank, California while surrounded by family members.

TMZ reported at the time that doctors had been working to help his body recover from the stroke and had hoped his brain had a good chance to heal itself, but it turned out that the damage was too extensive.

In the days before and after his passing, many of his close friends and colleagues from various shows took to social media in prayer and mourning of their beloved friend. Some shared images reminiscing on good times, and others shared words of grief.

My heart is sad for Luke Perry’s family. I got to work on the movie 8 seconds where Luke played the role of Bull Rider, Lane Frost, and he did a superb job. I can’t believe he’s gone so young.

No words can express what my heart feels hearing today's shocking news. Let us all say a prayer for his speedy recovery.

In that moment, many had no idea what this kind of tragedy would mean for his current role on Riverdale, and it left fans in complete shock.

“You know, honestly, we are I think all still in shock and are all still processing and grieving,” show creator Roberto Aguirre-Sacasa told People. “We know that we have to address it in some way, but we’re giving ourselves a little bit of time and space before we figure out the best way to honor him.”

Now, two months following the tragic loss of Perry, Aguirre-Sacasa opened up on Twitter, stating that Perry’s final episode on the show will be airing this week.

This week’s #Riverdale is the last episode Luke filmed. As always, Fred’s imparting words of wisdom to Archie. A beautiful, true moment between a father and his son. Wish these scenes could go on forever…❤️????‍? pic.twitter.com/meokbvo0Wt

Perry played Fred Andrews who is one of the lead character’s father. In his final show, his character will be giving his son Archie (KJ Apa) a piece of fatherly advice that is sure to hit home with fans of Perry and the show.

“This week’s #Riverdale is the last episode Luke filmed,” he tweeted. “As always, Fred’s imparting words of wisdom to Archie. A beautiful, true moment between a father and his son.”

There hasn’t been any word about how the show will handle Perry’s passing, but a fellow actor told The View that they had already figured out how to address it narratively and said: “we dedicated some of the episodes to him.”

The CW will air the final episode of Luke Perry’s role on Riverdale this Wednesday (April 24th) at 8 p.m. Eastern Time.

To find what channel The CW is broadcast on in your local region, visit their site and click the “Find Your Channel” button at the top right of the screen.

In international markets, you can watch Riverdale on Netflix – including episodes as they air in the United States.

The episode, which is titled Chapter Fifty-Four: Fear The Reaper, is described on TV Guide as follows:

When Jellybean goes missing, Jughead, Gladys and FP follow a series of cryptic clues to get her home. Elsewhere, Archie faces the fallout from his latest boxing match, while Betty makes a major discovery about Evelyn’s past. Finally, Josie makes a big decision about her future.

Both this episode and the following one do not reveal any information about Archie’s dad in their descriptions.

Watch Luke Perry in his final TV role on The CW’s Riverdale below and let us know if you’ll be tuning in to see his last performance on Wednesday.