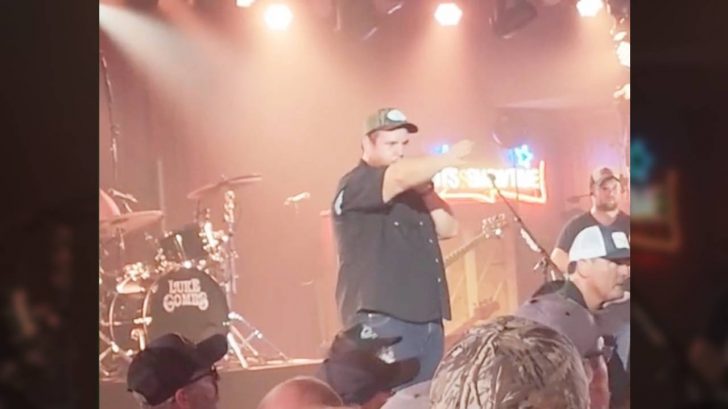 On Thursday, July 28th, Luke Combs played a free show at Coyote Joe’s in Charlotte, North Carolina. The concert was put on by Apple Music Live, and fans could register for free tickets.

Thank you @lukecombs for an amazing night at Coyote Joe’s! pic.twitter.com/oxrlH4FP0n

A reporter with WCNC Charlotte posted a video showing just how many people were in line an hour-and-a-half after doors opened. People really showed up for Luke!

An hour and a half after doors opened and this is the line for Luke Combs private concert at Coyote Joe’s. @wcnc pic.twitter.com/smddDBMB3r

He played many of his hits, including “Refrigerator Door,” which was included on the deluxe album What You See Ain’t Always What You Get.

In the middle of “Refrigerator Door,” Combs noticed a fan had passed out. He stopped signing and asked the venue if there was a medic in the building.

“Hold on a second, y’all got a medic in here? Somebody fell out right here. We need some help in here y’all. You got anybody, anybody [to help] will do really,” he said before getting the person a bottle of water.

Combs continued on the mic, “Make a hole right here so we can get this man some help.”

You can then see Luke looking very concerned and helping guide the medics attend to the person in the audience. Because of how Combs handled the situation, the crowd started chanting his name. Good on Luke for paying attention to the crowd and being concerned about the safety of his fans!

Watch what happened in the video below.