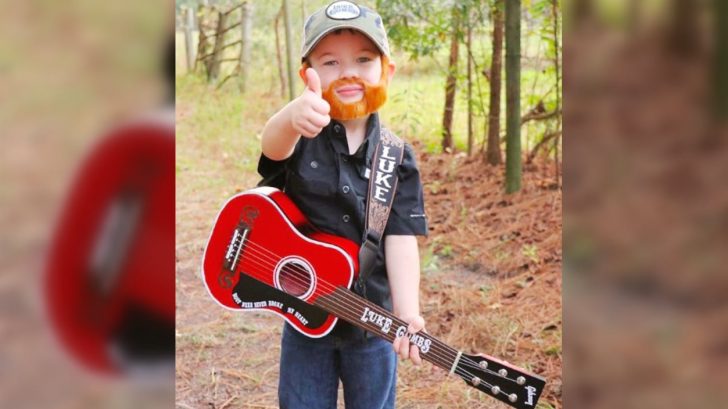 Apparently it was a popular thing to dress as Luke Combs for Halloween in 2019!

Even Luke’s own fiancée (now-wife), Nicole Hocking, chose to dress as the singer for All Hallows’ Eve. She took to Instagram to share photos of her costume, and stood next to Luke for a side-by-side comparison.

“my beard needs a lil work,” Nicole wrote alongside a bunch of Halloween-themed emojis.

my beard needs a lil work ???#halloween #lukelovesmydancing ?: all @davidbergman

While Nicole wasn’t quite able to nail the red shade of Luke’s signature beard, someone else got it exactly right. And that someone else was a young fan named Rhett!

The little fella pinned down every aspect of Luke’s look: his black button up shirt, his camo hat, his personalized guitar strap, and of course, his beard. Somehow, the photo made its way to Luke himself, and he knew he had to share it.

It was obvious that Luke was impressed with Rhett’s costume, as he wrote, “Saw a lot of good [costumes], but think Rhett wins! Looking good buddy!!”

If Luke says that Rhett won Halloween with his costume, then you know it was good. You can see it in the picture below.

Saw a lot of good ones, but think Rhett wins! Looking good buddy!!

Rhett isn’t the only young fan of Luke’s who has been given some recognition on his social media accounts.

In August 2019, Luke shared a video of a little boy proudly belting his hit single, “Beer Never Broke My Heart.” The boy took a big swig out of a root beer bottle before bursting into the song.

“Long neck ice cold root beer never broke my heart? Haha, these videos are awesome,” Luke wrote alongside the clip. It’s clear that his followers thought the video was awesome as well, because it has over 1.5 million views.

Be sure to check out that video below. It’s so cool to see young country music fans like this little guy below and Rhett above!

Long neck ice cold root beer never broke my heart? Haha, these videos are awesome. Think it’s safe to say the future of country music is in good hands with these kids!