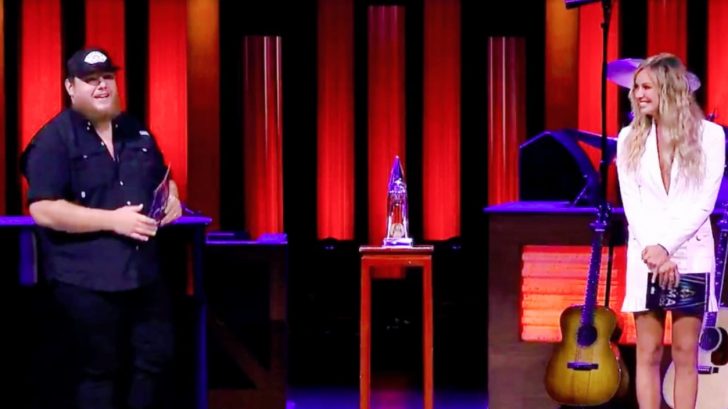 On Tuesday (September 1), Luke Combs and Carly Pearce stood together on stage at the Grand Ole Opry House to announce the nominees in select categories for the 2020 CMA Awards.

The latter award is the most coveted trophy the CMA has to offer. Earlier this year, there was a bunch of buzz surrounding the category after seven-time winner Garth Brooks announced he was removing himself from consideration.

He is refusing to allow his name as a nominee or winner of this award ever again.

After Brooks’ announcement, fans were extra anxious to hear who would be up for the CMA’s Entertainer of the Year Award this Year.

Combs stood to the side while Pearce read off the names of the artists nominated in the category. One by one, she revealed that Eric Church, Keith Urban, Carrie Underwood, and Miranda Lambert are all up for the award.

Then, she read off the fifth and final name…Luke Combs.

The #CMAawards ENTERTAINER of the Year nominees are… ✨ @EricChurchMusic ✨ @LukeCombs ✨ @MirandaLambert ✨ @CarrieUnderwood ✨ @KeithUrban Next, watch our livestream on YouTube and Facebook at 8AM|CT with @IngridAndress and @GabbyBarrett_ as they reveal the rest of the nominees!

Combs was thrilled to hear his name read as one of the nominees up for the CMA’s biggest award this year. He pumped his fist in the air and kept saying “alright!” over and over again.

The smile on his face made it clear he was over-the-moon excited about being up for the award. Tune in to the clip below to see his reaction!

Congratulations to Combs and all of the other artists who were nominated!