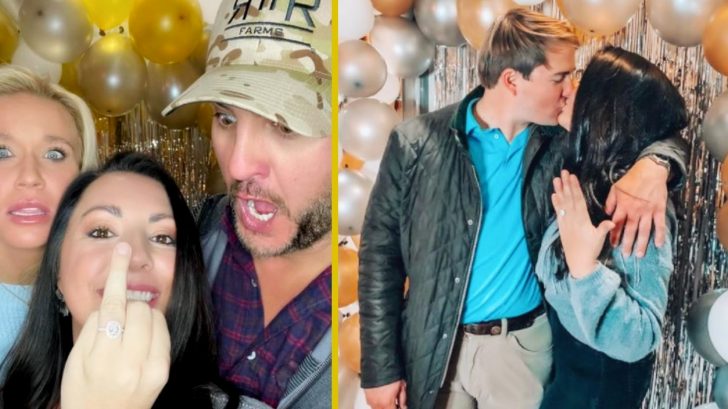 Kelly shared three children with her husband, Ben Lee Cheshire. They had two daughters, Kris and Jordan, and a son, Tilden or “Til.” Sadly, Ben passed away in 2014, leaving the kids without either of their parents.

Luke and his wife, Caroline, took in their nieces and nephew after their father’s passing. Til was still just a young teen at the time, so Luke and Caroline raised him alongside their own sons, Bo and Tate.

As for Kris and Jordan, they were grown and already out on their own, but came back to Luke and Caroline whenever they wanted to come “home.”

Luke and Caroline have become incredibly close with their nieces and nephew over the course of the past six years. You can tell how much they love each other just by looking at the photos and videos they share.

So when Jordan got engaged the day before Christmas Eve this year, Luke and Caroline were thrilled to say the least.

Jordan shared the news on social media that she and her boyfriend, Clint, got engaged on December 23. She posted a picture of the two of them kissing while she held up her newly-adorned ring finger (and she included a closeup shot of the ring!)

“woke up this morning a fiancé!!! @clinteudy I cannot wait to MARRY you. I love you so much,” she wrote.

Caroline commented on Jordan’s post, and made it clear she knew about Clint’s proposal plans.

“Hardest secret I’ve ever kept!!!! Love you so much!” Caroline wrote.

When Jordan shared a second post about her engagement (which shows photos of the actual proposal), Caroline chimed in with another comment.

Caroline also gushed about Jordan’s engagement on her own Instagram page. She posted a photo to her Instagram Story that shows Jordan flaunting her ring while she and Luke admired it.

Luke’s face was priceless in the photo. His mouth was open wide in a look of absolute shock and awe!

Congratulations to Jordan and Clint on their engagement! We’re so happy for them!