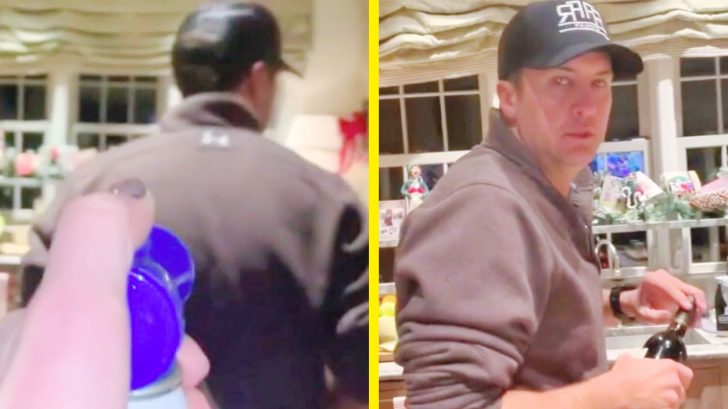 It’s no wonder why Luke Bryan and his wife, Caroline, work so well. The two of them share the same sense of humor, and are always making each other laugh and taking part in silly antics together.

The two get even more comedic during the Christmas season, especially in 2018. If you following either Luke or Caroline on social media, you caught on to the fact that the couple was participating in “12 Days of Prankmas” last year.

Luke was the one who pulled off one of the first pranks. It was time to shave his facial hair, so he decided to shave off his beard and leave just his mustache.

He then walked out to surprise Caroline with his new look, and her reaction was priceless.

The Best Prank Yet

But Caroline pulled off one of the best pranks, and it was at Luke’s expense.

Caroline took Luke’s bar of soap and covered it with clear nail polish. By doing so, she kept the bar from being able to form a lather.

She then filmed Luke in the shower as he attempted to use his tampered soap. He kept asking Caroline if she thought the soap smelled alright, because he could tell that something wasn’t quite right with it. She couldn’t help but laugh because her prank had worked so well!

The two also too to scaring each other as part of Prankmas. They took turns hiding plastic snakes in various places in the home in an attempt to scare each other, their kids, and anyone else who happened to walk in.

Caroline was probably the most scared by the snake prank, after she discovered one of the slithery critters hiding in her couch. She was not happy about it!

But don’t worry, Caroline made sure to get Luke back with a scary prank of her own!

This time, Caroline followed an unsuspecting Luke into the kitchen with a tiny air horn. She waited for the perfect moment, and then, while her husband’s back was turned, she pressed the button to let out a noisy wail.

Luke jumped in fright, and yelled an expletive in response to the scare. But after the initial terror rushed over him, he couldn’t help but laugh at his wife’s prank.

Luke wasn’t the only one that Caroline scared with the air horn prank. She also got her other family members, including her nephew Til. But she said that he managed to get her back later!

While Luke and Caroline act silly a lot of the time, they both have sensitive sides as well. You can see that side come out in Luke’s romantic video for “Crash My Party” below.

Luke and Caroline’s pranks just keep getting better, so we wonder what they’ll think of next?