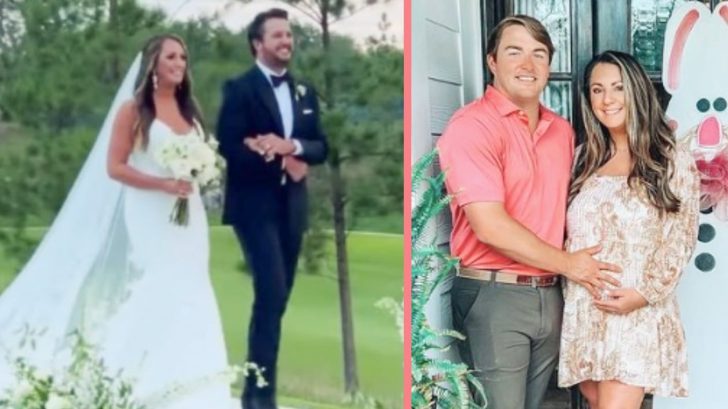 Luke Bryan‘s sister, Kelly, passed away in 2007. She left behind her husband, Ben, and their three children: daughters Jordan and Kris, and son Til.

Sadly, Ben passed away just seven years after Kelly died. After Ben died, Luke and his wife Caroline took in Jordan, Kris, and Til.

When Jordan married Clint Eudy in September 2021, Luke was the person who walked her down the aisle. He was beaming with pride as he led his beautiful niece to her groom.

Just a few months after they married, Jordan and Clint had some happy news to share. The couple announced they were expecting their first child…a baby boy.

They revealed that their son was due to arrive in July 2022.

On April 25, Jordan shared a new photo celebrating the 30-week mark in her pregnancy. The picture shows her cradling her bump while holding one of Jonathan’s sonogram photos.

“10 more weeks until we get to meet this sweet little face in person,” Jordan captioned the photo.

However, Jordan got to meet her son much earlier than expected.

On Mother’s Day, Jordan shared the news that she had given birth the day prior (May 7). Baby Jonathan was born premature, and weighed 3 lbs 13 oz.

Jordan shared several photos of her baby boy, and captioned them:

“Yesterday I got the best Mother’s Day Gift of all…Jonathan Chesh Eudy made his debut on 05.07.22 at 10:27 am. weighing a whopping 3lbs 13oz. Clint and I are extremely thankful and cannot wait to get him home. We know he was handpicked from Heaven by the sweetest angels.”

You can see the photos Jordan shared below.

Congratulations to Jordan and Clint on becoming parents. We’ll be keeping them and baby Jonathan in our prayers.