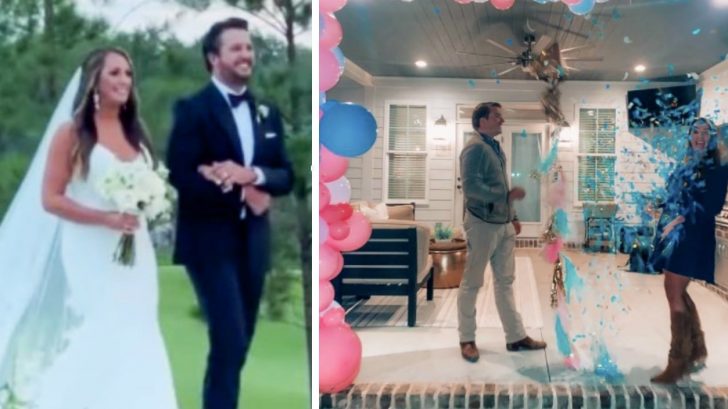 In September, Luke Bryan‘s niece Jordan Cheshire married Clint Eudy during a stunning ceremony in Tennessee. Jordan is the daughter of Luke’s sister, Kelly, who passed away in 2007.

Seven years after Kelly died, her husband, Ben, passed away as well. After Ben died, Luke and his wife, Caroline, took in Jordan, her sister Kris, and her brother Til.

So when it came time for Jordan to walk down the aisle at her wedding, it was Luke who walked arm-in-arm with her. He was beaming with pride as he led his beautiful niece to meet her groom at the altar.

Now, just a few months after they said “I do,” Jordan and Clint have some happy news to share…they’re going to be parents!

Jordan announced on Instagram that she and Clint are expecting their first child in July 2022. She shared the news alongside a gender reveal video, which shows her and Clint popping a gold balloon to reveal a bunch of blue confetti inside. Baby Eudy is a boy!

“We are so excited to announce that a sweet baby boy will be joining our family July 2022,” Jordan wrote.

Luke’s mom, LeClaire (who is Jordan’s grandmother), commented as well. She said, “His Great Grandma is going shopping tomorrow. What a blessing for Jordan and Clint much love.”

You can see Jordan and Clint’s pregnancy announcement and gender reveal video below. Congratulations to them!