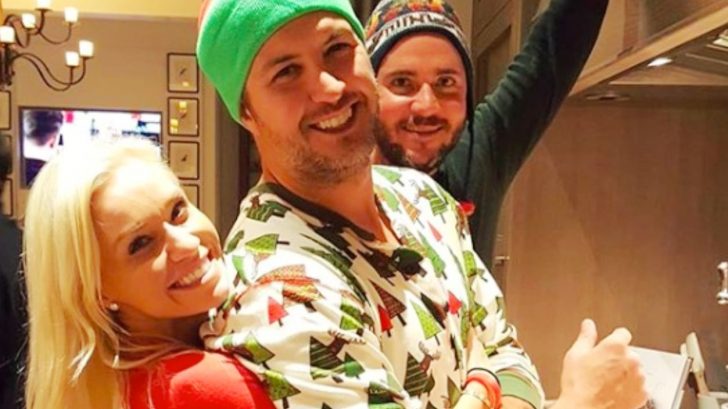 On December 8, Luke Bryan and his wife, Caroline, celebrated their 13th wedding anniversary. The couple has welcomed two children since marrying in 2006, sons Bo (age 11) and Tate (age 9).

The couple also took in their nephew, Til, following the passing of his father, Ben (Luke’s brother-in-law), in 2014. Luke’s sister, Kelly, had passed away unexpectedly in 2007, so Ben’s death left Til orphaned.

Luke and Caroline have also cared for Til’s two adult sisters, Kris and Jordan. The family often vacations as a group, and seems to enjoy the time they spend together.

And this is our family picture….Happy Thanksgiving!

The whole Bryan family also has a good sense of humor. Back in 2018, Luke and Caroline participated in a season they dubbed “Prankmas,” which was when they played pranks on each other in the 12 days leading up to Christmas.

For example, Caroline covered Luke’s favorite bar soap with clear nail polish so it wouldn’t lather. Then, she filmed his reaction to his dysfunctional soap and shared it online for all to see.

“Does this soap smell ok????” No Luke it doesn’t. It’s been sabotaged. Merry ChristmASS….”you tryin’ to joke on me?!?!” #12daysofpranksmas #sorryiloveyou

So when the pair celebrated their anniversary this year, fan’s fully expected the two would have some comical things to say about each other. And they certainly did!

Caroline wished Luke a happy anniversary by sharing a series of candid photos. Our personal favorite picture is the one from the year that he and Caroline dressed as an old man and old woman for Halloween!

“Happy 13th anniversary Love Bug,” Caroline captioned the slideshow. “So glad you’re just as weird as I am!”

Happy 13th anniversary Love Bug. So glad you’re just as weird as I am! ♥️

Like Caroline, Luke shared his anniversary wish in a comedic way.

He shared a single picture, which shows him and Caroline out on a boat with silly expressions on their faces as they pump their fists in the air. But Luke’s caption is the most hilarious part of his anniversary post.

“Happy 13th anniversary my love. I love you. Thanks for putting up with my a–,” Luke wrote. How funny is that?

Happy 13th anniversary my love. I love you. Thanks for putting up with my ass.

Although Luke and Caroline enjoy goofing off together, they can also be sweet and romantic. See what we mean when you watch the video for Luke’s song “Crash My Party” below. Caroline makes an appearance in the video!

We hope Luke and Caroline had a wonderful anniversary, and wish them many more years of love and laughter.