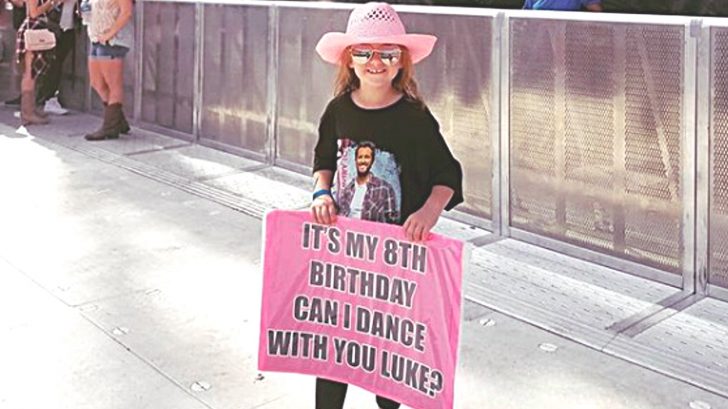 If you want to catch the attention of your favorite country star at a concert, a good way to do so is make a unique sign. Many fans have been recognized or welcomed on stage just because their signs happened to catch an artist’s eye.

Hoping the same thing could happen to her, one young Luke Bryan fan named Bella made a special sign to take to his concert at the MetLife Stadium in New Jersey. It just so happened that it was Bella’s eighth birthday, and she wanted to dance with Luke to celebrate it.

Bella’s sign actually caught the attention of a stadium employee first. That employee made sure that Bella and her mom had a seat right next to the side of the stage, so that way Luke had a better chance of seeing her sign.

Just as everyone hoped, Luke noticed Bella’s sign and knew he had to grant her birthday wish. It was in the middle of his show, but Luke didn’t mind putting things on hold to make Bella’s night a special one.

But as much as Bella had wanted to join Luke on stage, she got awfully shy once she was actually up there. Such shyness isn’t typical of Bella, said her mother Jennifer.

Because she was so shy in the moment, Bella really couldn’t bring herself to do much more than stare up at Luke in awe. We don’t blame her though, because we probably would have froze up if Luke invited us on stage as well!

As you’ll recall, Bella’s sign specifically asked Luke if he would dance with her to celebrate her birthday. Wanting to make her birthday wish come true, Luke grabbed her hand and twirled her around in an adorable little dance while he sang “Someone Else Calling You Baby.”

Luke ended their time together in the sweetest way, by giving Bella a big hug. Even though she was shy about the whole thing, you can tell from her cheesy grin that she was over the moon with happiness!

Little Bella got to live out every country gal’s dream when Luke invited her on stage with him! Watch the adorable moment they shared in the video below

That’s one birthday Bella’s sure to never forget!