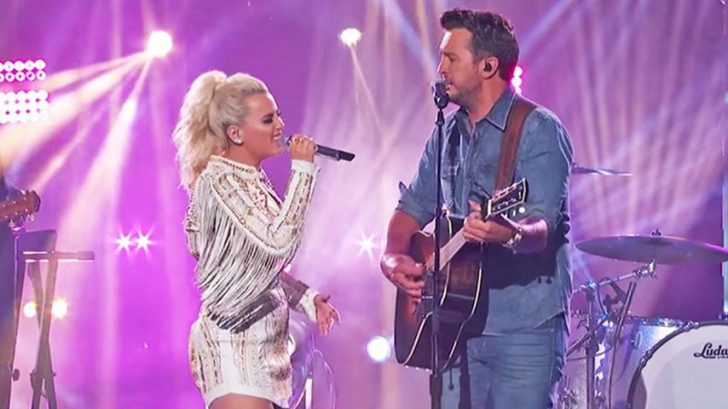 “Finally I get to sing for you guys,” quipped Luke Bryan, who’s more accustomed to pickin’ a guitar than pickin’ future stars. The first-year Idol judge seemed relieved to have a chance to turn the tables and do what he does best, shake his hips and move his lips.

Country star Luke Bryan moved out of the judges seat on American Idol and onto the stage with Idol finalist Gabby Barrett to reassure us “Most People Are Good” in a dazzling duet.

The duo flawlessly collaborated on Bryan’s current top-selling song with a nod to the often overlooked goodness buried in a whole heap of not-so-good.

Barrett, the Pittsburgh, PA native who ran with Miranda Lambert‘s “Little Red Wagon” during the finals, didn’t win the title of American Idol, but enjoyed a performance she’ll remember for a lifetime. She was the first of the final three Idol finalists to be eliminated.

Smiling in unison and at ease with the words, the pair left no doubt that indeed, most people really are good, an inspiring reminder to us all.

Prior to sharing his current hit with Gabby and the very attentive audience, Bryan took an opportunity to showcase his new single, “Sunrise, Sunburn, Sunset,”  what some on social media have tagged as the song of the summer.

What better time to drop a new single than when more than eight million viewers are glued to the screen?

Obviously in his comfort zone, Bryan crossed the stage and engaged the adoring fans, who came to see the winner of American Idol 16, but ended up getting much, much more. They were among the first to hear the follow up to Luke’s No. 1 hit “Most People are Good,” from his album What Makes You Country.

After cruising with the crowd and a chorus of “Sunrise, sunburn, sunset, repeat…,” from what will surely be another hit song for the celebrated performer and his duet with Gabby, the energy generated set the stage for crowning the new American Idol. There was definitely no lack of talent or star power on the stage or behind it on the closing night of Idol‘s season 16.

What do you think of Luke Bryan’s new summer song? What about his performance with Gabby?

Did your Idol win?