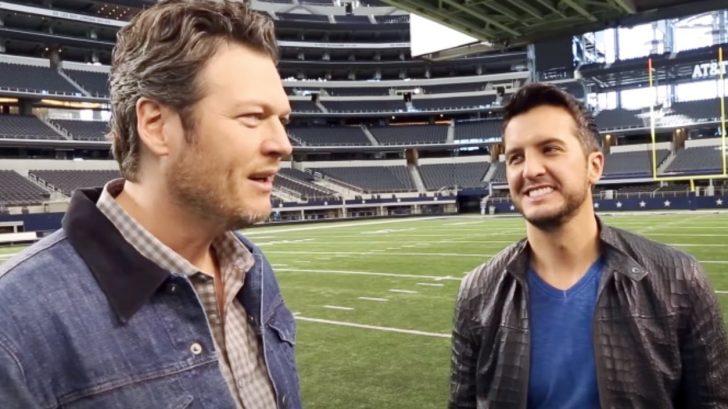 Don’t let them fool you, Blake Shelton and Luke Bryan are actually great friends, and have been for years. The two country music superstars get a kick out of poking fun at one another, but it’s all rooted in love.

Shelton and Bryan’s “frenemy” dynamic is what made them so entertaining to watch when they served as the co-hosts of the ACM Awards for several years.

While their hosting days are behind them now, Shelton and Bryan still find opportunities to tease each other.

Bryan offered a shout-out of sorts to Shelton during a show for his residency at Resorts World Las Vegas. He covered Shelton’s song “Home,” which was originally recorded by Michael Bublé.

This is something that Bryan was quick to point out, telling his Vegas crowd “Home” was “a Michael Bublè song that Blake stole.”

Then, while singing “Home,” Bryan messed up and sang the wrong lyrics. He addressed his mistake in a hilarious way, saying, “I don’t know Blake’s sh–t, y’all sing it.”

One attendee managed to capture the hilarious moment on camera. You can watch it below.

The audience member who shared the video said it “was the funniest part of the concert” that night. We certainly got a good laugh out of it!

@hotmamainthemaking I need everyone to tag @Blake Shelton. This was the funniest part of the concert and clearly @LukeBryan had too much to drink! #lukebryanconcert #blakeshelton #vegas #momstrip2022 ♬ original sound – Jessica Pittman ❤️