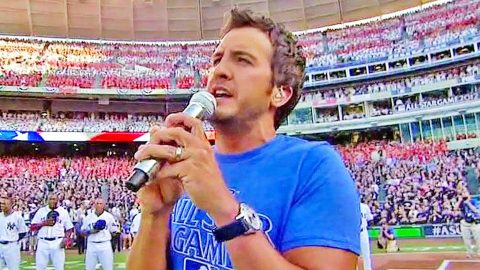 The All-Stars are ready to go.

Who will get bragging rights? pic.twitter.com/SYv48jy32B

Bryan’s performance of the song was passionate and heartfelt. He kept his eyes closed most of the time while he sang, concentrating on the meaning behind the powerful song he was singing. As a result, his emotion and pride for his country had the chance to shine through in his voice.

The performance also gave Bryan the chance to show off his range, as he raised his voice to hit those tricky high notes as he came to the words, “and the rockets red glare.”

As amazing as Bryan’s performance was, it’s hard to believe it actually was the subject of some criticism at the time. Apparently, some people were angry that Bryan had a few of the lyrics written on his hand, but Bryan had the perfect response on Twitter.

“I had a few keys words written down to insure (sic) myself that I wouldn’t mess up. I just wanted to do my best. I promise it was from the heart,” he wrote.

I had a few keys words written down to insure myself that I wouldn't mess up. I just wanted to do my best. I promise it was from the heart.

He then added in another tweet, “If I offended anyone with my approach I sincerely apologize. Anytime I sing the anthem it is an honor and my heart beats out of my chest.”

We can tell from the way that Bryan performed “The Star Spangled Banner” that he was truly honored to be singing it at such an important event. His love for our country is clear, and it shows through his performance.