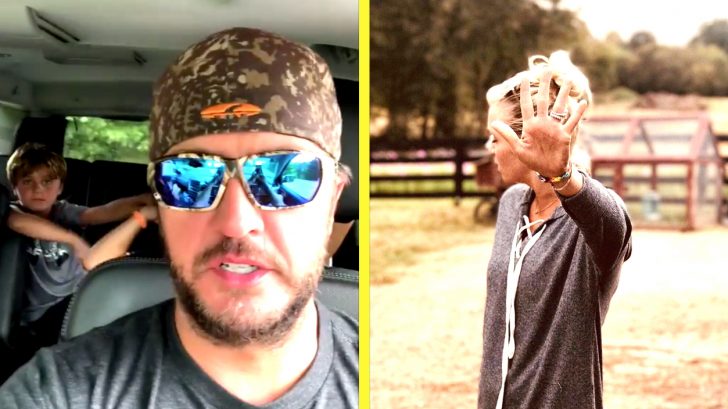 Alongside a road in the middle of July 2018, country music superstar Luke Bryan and his loving wife Caroline ran out of gas while taking the kids somewhere fun…

Luke has always been known for his funny antics, but it’s really his wife who has stepped up the game.

Reason #31 why I was kicked out of the junior league….some people take one Jell-O shot. I took the whole platter. Oops. ?‍♀️ @nicolebobek because sharing is caring.

Traveling down the road, Caroline admits in her own Instagram post that she told her husband to stop and get gas…but apparently he didn’t agree.

Luke Bryan and Caroline run out of gas w/ the kids pic.twitter.com/asRnCzwRRY

As it turns out, Luke himself ended up uploading a video of him in the driver’s seat asking the kids to explain to the camera what “had happened.”

“We ran out of gas,” one of the kids said sadly from the rear.

As Luke chuckles the camera pans over to his wife – whose expression needs no words!

“I told him to get gas. Now we’re stuck on the side of a road in the middle of July. Thanks Dad @lukebryan,” she wrote posting the video of their no-gas adventures.

In another post to her story, Luke said that he “ran the car outta gas and now they’re stranded” before both he and Caroline bust up laughing at the whole situation.

Check out their full hysterical video below!

I told him to get gas. Now we’re stuck on the side of a road in the middle of July. Thanks Dad @lukebryan