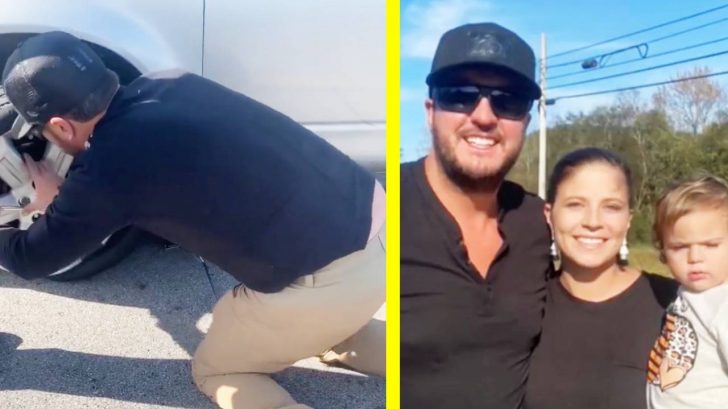 Single mom Courtney Potts was driving with her four-year-old son and toddler daughter in the car near Columbia, Tennessee when she suddenly blew her driver’s side front tire. According to Taste of Country, Potts “limped the car to the shoulder.”

Shortly after, a truck pulled in front of her and the driver got out, telling her, “Look, we really need to get you out of this road because I almost hit you!”

She hadn’t even seen his face, but she knew his voice. It was Luke Bryan!

“I got out and did a double take and as soon as I heard his voice. I didn’t even have time to be in shock,” she told Taste of Country.

The curve where they were pulled over was pretty dangerous, so the country star and American Idol judge had her pull up a littler further to be in a safer spot. They found her spare tire and Luke got on the ground with his own tire jack and started changing her flat tire.

Potts filmed a bit of it and posted it to TikTok and Instagram saying, “Thank you again @lukebryan I cannot thank you enough for helping me and my kids! It really made our day so much better!”

The video was set to the tune of Bryan’s hit song “What Makes You Country” and showed Bryan on the ground, working to get the lug nuts off the flat. It also included a photo of Potts, her daughter, and Bryan after he got the job done.

Taste of Country reports that Bryan told Potts he was taking his sons Bo and Tate hunting, as they own a hunting property nearby. The publication also says that Bryan would normally have his kids change the tire, but because the road was dangerous, he had them stay in the car.

“He’s just a humble guy,” Potts said.. “I told my mom he went into dad mode almost. All these women commenting on his butt on my TikTok (Laughs), and it was more of a dad moment. He was seriously worried about me and fixing the tire on this car!”

Watch the videos of Luke coming to her rescue below!

@courtneypotts@LukeBryan I cannot thank him enough for stopping to help me and my babies!♬ What Makes You Country – Luke Bryan