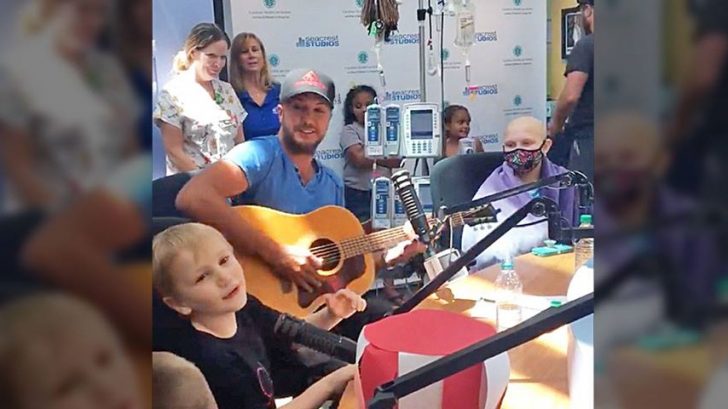 It may not have been Luke Bryan‘s biggest audience, but for this country megastar, it was definitely one of his most important engagements.

Bryan’s stop in Charlotte was his third stop in as many cities on his What Makes You Country Tour, all within a 48-hour time span. He played Raleigh on Thursday night, Charlotte on Friday and Pittsburgh, PA on Saturday night.

While this schedule would have some singers hankering for a break, Luke took advantage of the minimal free time he had to pay a most welcome visit to some of his younger fans, those at Levine Children’s Hospital in Charlotte.

During his stop at Levine’s while taking in the smiles of patients and staff members, the superstar led the intimate audience in a sing-along of “Kick the Dust Up,” one of his 2015 releases that sold more than a million copies.

The hospital shared a Facebook video of Bryan leading his small group of attentive fans in what probably proved to be the highlight event of their summer.

We ? Luke Bryan! Thanks for visiting us in #SeacrestStudios! Ryan Seacrest Foundation #MyLevineChildrens

The hospital expressed their love and appreciation for Bryan’s thoughtful stop. It was a cool thing to do on a sweltering hot day in humid North Carolina.

Based on fan’s comments following the post, Luke’s fans weren’t so surprised their favorite singer had stopped in to put a smile on so many faces.

Some of the singer-songwriter’s fans cited his visit at Levine’s was just one more reason to love their country singin’ hero.

Thanks, Luke and Seacrest

Levine Children’s Hospital sent a huge thanks not only to Bryan, but also the Ryan Seacrest Foundation for making the visit happen: “Thanks for visiting us in #SeacrestStudios!”

Luke Bryan may be a superstar, but he’s never far from his fans and those who inspire him to be the person he is, after all…he does think “Most People Are Good.”