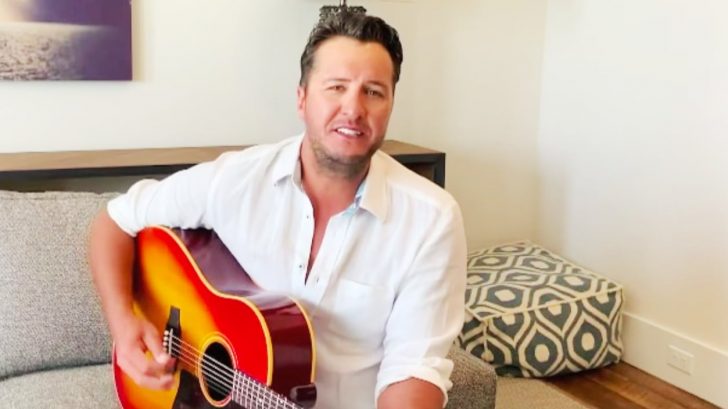 Due to the COVID-19 pandemic, one of country music’s biggest awards shows had to be postponed. In mid-March, the ACM announced its annual awards ceremony would now be held on September 16 instead of April 5.

Mark your calendars! The 55th ACM Awards will now air live on Wednesday, Sept. 16, at 8/7C on the CBS Television Network. #ACMawards

But the ACM didn’t let its empty April 5 broadcast slot on CBS go to waste. Artists who originally planned to be at the ceremony sat down at their homes, grabbed their guitars, and filmed videos of themselves singing some of their songs for a special called ACM Presents: Our Country.

There were tributes to the late Kenny Rogers and Joe Diffie, duets (both virtual and in-person), and a whole lot of hope to be found the the performances featured during the special.

Luke Bryan served as one of the night’s brightest lights, thanks to his heartfelt performance of his 2018 single, “Most People Are Good.”

“Most People Are Good” went on to become Bryan’s 20th number one single, and it’s easy to understand why. The song offers a touching message, and has Bryan singing about how “this world ain’t half as bad as it looks.”

Considering the times we’re living in right now, “Most People Are Good” was exactly what we needed to hear during the ACM Presents: Our Country special.

Bryan filmed his performance from a couch in his home, with nothing but his acoustic guitar to accompany him. But before he started singing, Bryan took a moment to dedicate his performance to the hard-working people in the medical community:

“I want to dedicate this song to all of our medical professionals out there,” he said. “Our doctors, our nurses, the EMTs. Everybody out there on the front lines of this pandemic that are putting themselves in harm’s way to protect my family.”

He ended his message by saying, “So for all of you guys and girls out there working so hard for us, I’m gonna dedicate this song to you.”

Bryan then moved in to singing “Most People Are Good.” You can watch his performance and his dedication to healthcare workers by tuning in to the video below.

We appreciate Bryan and the others artists who got together to create the Our Country special. It was nice to have a little musical distraction from the world for a while.