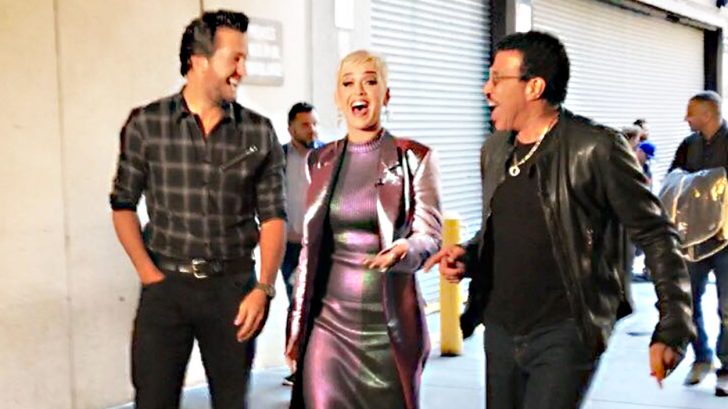 Just in time for Halloween, we got quite the treat from the American Idol judges. During an appearance on Live with Kelly and Ryan, the trio surprised the audience with their “outfit” choices. The Idol judges, Katy Perry, Luke Bryan, and Lionel Richie couldn’t wait to show off their Halloween get-ups.

Invited by TV hosts Kelly and Ryan, the American Idol judges were on for a live interview. When the hosts welcomed them out on stage, everyone got a surprise they didn’t see coming! Strutting out onto the stage in giant, life-size, and inflatable animal costumes came out the courageous judges. Luke, who was dressed as a bald eagle, came out dancing and hopping across the audience flapping his inflatable wings.

Katy, dressed as a sloth, was the mastermind behind the inflatable madness, Luke & Lionel admitted. There was non-stop laughter between the trio and the hosts as they began their interview. After catching up, Kelly set up Luke, Katy, Lionel, and Ryan to play “Who’s Most Likely?” in hopes the judges would rat each other out. When Kelly asked the group, “Who’s most likely to go skinny dipping?” everyone voted for Luke! Katy gave a hint at a story,

His reaction sparked curiosity amongst the viewers! The series of other questions will have you cracking up while learning some interesting facts about your favorite judges.