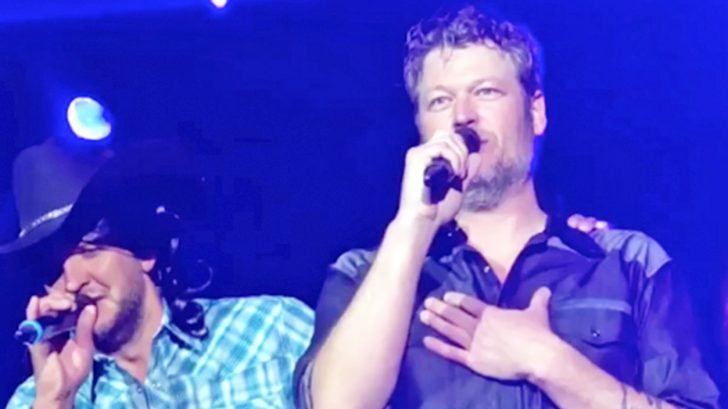 During Shelton’s headlining set, Bryan crashed the stage in a getup that longtime Blake fans could definitely appreciate! He dressed up in a wig, flannel, and cowboy hat, looking quite similar to the days when Blake Shelton rocked a mullet!

Bryan shared a close-up photo of his costume using the caption, “Vintage BS,” while pointing to a Smithworks Vodka cup.

After getting over the initial shock of Bryan’s wardrobe, the two thrilled fans with several duets of some country music favorites including George Strait’s “All My Exes Live In Texas” and Alabama‘s “Dixieland Delight.”

Bryan played the Alabama classic’s recognizable intro on the guitar and once people figured out what song they were about to sing, they went wild. Bryan sang the first verse and chorus before Shelton joined in on the harmonies. The performance included an awesome fiddle solo and an opportunity for the band to show off a little bit!

Watch their awesome performance of “Dixieland Delight” below.