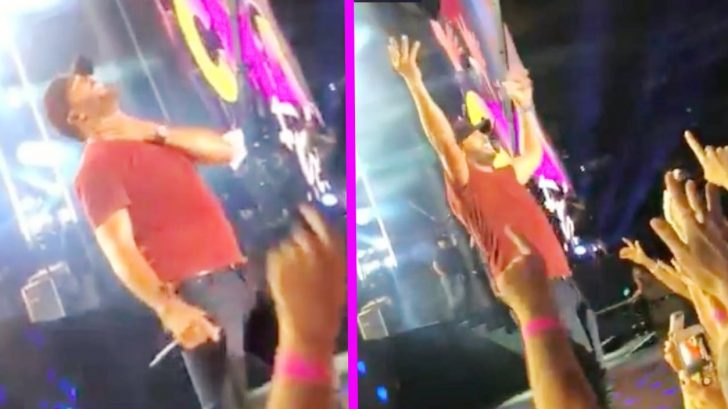 Luke Bryan was given quite the task during CMA Fest in 2019. Out of the dozens of artists that performed during the multi-day festival in Nashville, Bryan was the one who got to close it out.

2019 marked the second year in a row that Bryan was given the closing slot during the Nashville event, which draws in thousands of tourists from all over the world. The CMA Fest sets are shorter than typical concerts, so Bryan only had time to sing ten songs before the whole thing came to an end.

Fans were treated to some of Bryan’s biggest hits, including “Kick the Dust Up” and “Country Girl.” He also sang his newest single at the time, “Knockin’ Boots,” which he previously performed a few days prior at the CMT Music Awards.

Bryan is known for performing all sorts of cover songs during his regular concerts, so he knew he couldn’t leave CMA Fest without singing a cover for the crowd as well. But rather than throw the cover into the middle of his set, he used it to close out the entire festival!

So which song did Bryan select as the closing piece for CMA Fest 2019? It’s a song we’re sure y’all know quite well…”Livin’ on a Prayer” by Bon Jovi.

Bryan was on his fourth day of concerts, so before he started singing, he made a confession to the crowd. “I’m not going to be able to hit all those notes…You all are going to have to help me,” he said.

The crowd was more than willing to help out, and could be heard singing along at the top of their lungs as Bryan performed the beloved rock hit.

You can catch a some videos of the electric performance below. What a way to end CMA Fest!

Great way to end the weekend! Two of my favorite things: #CMAFest and a @BonJovi song ❤️@LukeBryanOnline pic.twitter.com/owR4R5xYfn