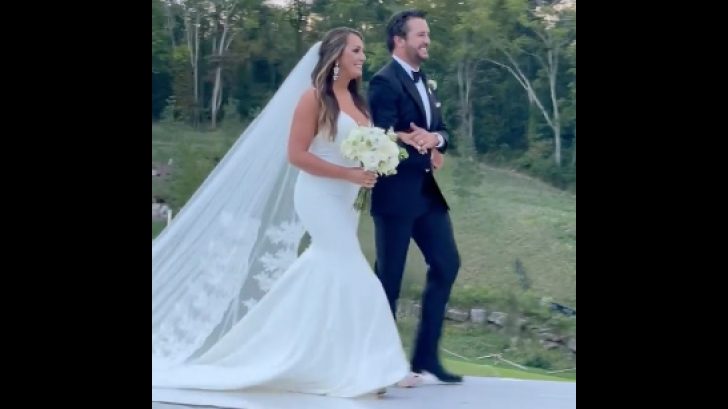 It was a weekend of celebration for Luke Bryan and his family as his niece, Jordan Cheshire, wed Clint Eudy in a fairytale Tennessee wedding.

Jordan is the oldest of three children born to Bryan’s older sister, Kelly, who passed away in 2007. Kelly’s husband died 7 years later and Luke and his wife Caroline helped raise the three kids they left behind.

Emily Clarke Events shared photos and videos of the stunning wedding on social media, and shared that the event took place south of Nashville at Troubadour Golf and Field Club, south of Nashville, on Sunday, September 6. The couple exchanged vows under a white curtain tent overlooking lush Tennessee hills.

The aisle was lined with stunning white flowers and greenery that led to the altar that was also surrounded by floral arrangements.

The reception site was a black tent draped in white lights, referred to as “a sky full of stars,” and magnificent flower arrangements that adorned every table, the ceiling and the stage.

According to the wedding planner, “The starry night sky was reflected on the long, mirrored tables and I love that it added another layer of unexpected surprise to the celebration.”

More than 10,000 stems of baby’s breath covered a tunnel that led from the ceremony site to the reception area.

But, perhaps the most beautiful moment of the event came when Luke Bryan walked his stunning niece down the aisle. The American Idol judge donned a tux and a huge smile as he walked arm in arm with Jordan to the altar. Luke and Jordan also shared a dance during the reception, as documented by Emily Clarke Events’ Instagram story. The clip shows the pair dancing to Phil Collins’ “You’ll Be In My Heart.”

Watch Luke Bryan walk his niece down the aisle in the clip below.