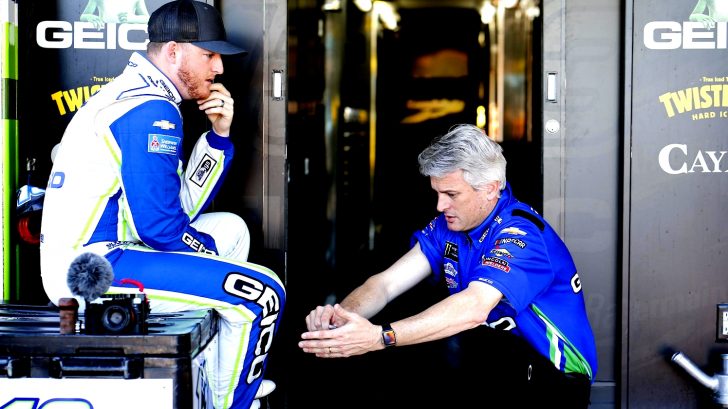 This NASCAR crew chief has been a well-known part of the Cup Series for more than 15 years and, during that time, has won 13 races. His suspension marks the third by NASCAR in just under two weeks.

Matt Borland, who is currently crew chief for Germain Racing and Ty Dillon’s No. 13, was suspended for an unspecified amount of time after failing a random drug test.

While NASCAR does not comment on the results of drug tests taken by members, his team said in a statement that Borland was informed by a NASCAR doctor that he had failed the test after a positive result for DMAA came up.

Ty Dillon crew chief Matt Borland has been suspended for failing a drug test, the team announces. The team says it is for DMAA, which is in the diet coffee he drinks and is a derivative of a drug found on the label. Justin Alexander will replace him. #nascar @NASCARONFOX

Borland is set to be replaced by Justin Alexander for the duration of his suspension. Borland has made quite a name for himself as a talented crew chief in NASCAR ever since his first race during the 2000 Cup Series with Ryan Newman. Over his 15 years as a crew chief in the Cup Series, he’s won 13 races – eight of those with Newman as a driver for Team Penske.

NASCAR seems to be on a roll with these suspensions and Borland is the third in two weeks. Another substance violation saw part-time Cup Series driver Bayley Currey suspended and Truck Series driver Tyler Dippel was suspended on Friday night with no reason cited.

Borland on suspension: "Even after doing my due diligence, I felt comfortable in drinking the coffee. I plan to work with NASCAR to figure out what exactly has happened and resolve this issue as quickly as we can. I will cooperate with them and do whatever is requested of me."