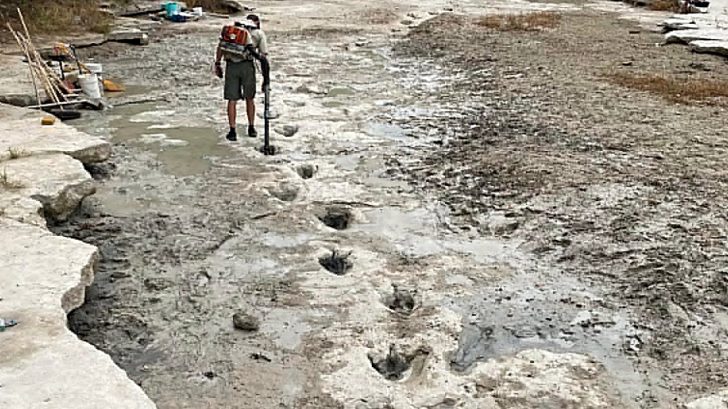 Dinosaur Valley State Park in Texas just shared some interesting photos and videos announcing that they’ve discovered what’s looking to be the longest dinosaur tracks ever found on the planet.

According to Stephanie Garcia, a spokeswoman for the Texas Parks and Wildlife Department, the tracks are believed to have been created 113 million years ago by an Acrocanthosaurus, which are theropods, or bipedal dinosaurs that have three toes and claws at the end of each limb.

They were found in the Paluxy River, which is about 60 miles southwest of Fort Worth after severe drought conditions evaporated a majority of the water in the river to the point where the river is experiencing record low water levels.

“Due to the excessive drought conditions this past summer, the river dried up completely in most locations, allowing for more tracks to be uncovered here in the park,” Garcia said in a statement, according to CBS. “Under normal river conditions, these newer tracks are under water and are commonly filled in with sediment, making them buried and not as visible.”

Garcia added that the tracks are likely to be buried again this week after it rains but the finding of them, even if it’s just for this brief moment of time, it’s still very exciting for researchers and the public.

“Tracks being buried under layers of sediment do help protect them from natural weathering and erosion,” Garcia said.

Louis Jacobs, a vertebrate paleontologist and an emeritus professor of earth sciences at Southern Methodist University, drove out to the location on Saturday. He said that these uncovered tracks joined tracks that were already known, now completing 150 dinosaur steps.

“Those footprints — they’re spectacular because they’re deep,” Louis Jacobs said in a statement, according to CBS. “You can see the toenails. There’s more than one kind, and there’s a lot of them.”

The dinosaur that created them would have stood 15 feet tall and weighed close to seven tons as an adult. The tracks left in the river’s sediment eventually hardened and turn into limestone.

Other tracks that have been found at Dinosaur Valley State Park have been from a sauropod, or long-necked, small-headed dinosaur, called Sauroposeidon proteles. This dinosaur would have stood a staggering 60 feet tall and weighed 44 tons as an adult.

See Footage Of The Dinosaur Tracks Below