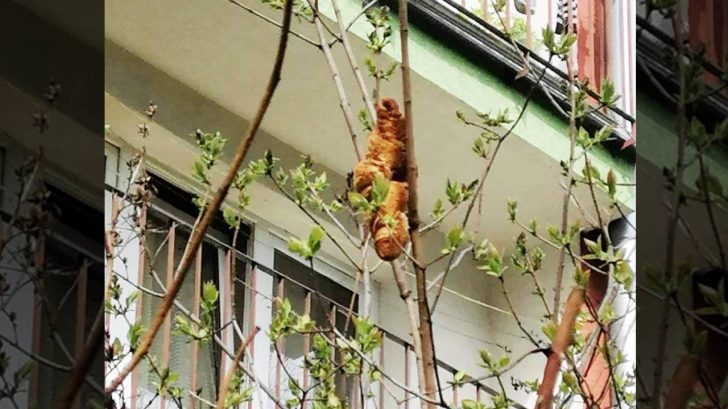 We’re sure you’ve been in a similar situation. You see something crawl up into a nearby tree and you are not sure what type of animal it is. The mystery of the animal makes you nervous, so you avoid it at all costs!

The residents of the Polish city of Krakow experienced just this recently. The mystery animal had people so scared that the Krakow Animal Welfare Society was called by a female resident. According to BBC, the woman described the animal as a “creature” and said, “People aren’t opening their windows because they’re afraid it will go into their house.”

She also told the animal welfare officers that the animal had been in the tree for two or three days. When the officers asked her if it was a bird of prey, she said it looked more like an iguana. At this point, the officer said he had to check his calendar to make sure it wasn’t April Fool’s Day!

He figured it was someone’s pet that had gotten out, but was wondering if it was still even alive after two nights in freezing cold weather.

When the and another officer pulled up at the scene, they looked around for the creature so many were afraid of.

“Suddenly,” the officer wrote on the Krakow Animal Welfare’s Facebook page. “There it is, we have it! The brown creature sits on a lilac branch, without it grows about halfway along the block, the creature sits and doesn’t move – exactly as described by the reporting lady. His brown skin glistens in the sun, although there are some dullness here and there. We are looking more closely.”

As they looked more closely they figured out what it was and it “almost knocks us off our feet … an attack of laughter,” he writes.

What they found in the tree was actually a croissant. Yep! A pastry they believe was thrown out of a window to feed birds.

While this “creature” ended up being not threatening at all, they always advise to err on the side of caution if you don’t what what the animal is or how to get rid of it. They definitely got a good laugh out of this call!