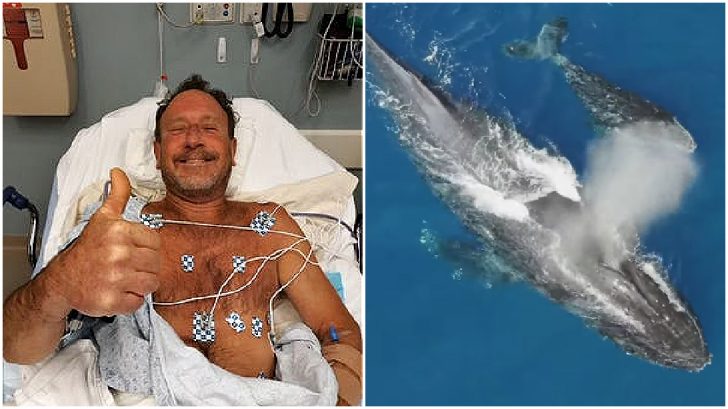 If there were such a thing as a human having nine lives, Michael Packard could claim such a feat. The veteran lobster diver has endured his fair share of close calls, but his most recent encounter with a whale is perhaps his most unique.

Early Friday morning (June 11), Packard, a veteran lobster diver, entered the waters of Cape Cod for the second time that morning. His boat, the “Ja’n J,” was surrounded by a fleet of fishing boats that were catching striped bass. As part of Packard’s job as a commercial lobster diver, he deep dives and gets lobster off of the sandy ocean bottom. During his dive on Friday, the 56-year-old was about 10 feet from the bottom of the ocean when he was swallowed by a humpback whale.

“All of a sudden, I felt this huge shove and the next thing I knew it was completely black,” Packard told reporters after being released from Cape Cod Hospital. “I could sense I was moving, and I could feel the whale squeezing with the muscles in his mouth.”

The diver, outfitted with scuba gear and was breathing through the entire ordeal, initially thought he was inside the mouth of a shark, but realized that he couldn’t feel any teeth. It was then that he realized he was inside of a whale.

“I was completely inside. It was completely black,” Packard said. “I thought to myself, ‘there’s no way I’m getting out of here. I’m done, I’m dead.’ All I could think of was my boys…they’re 12 and 15 years old.”

Packard said that he began to struggle and the whale started shaking its head, letting Packard know that he didn’t like it.  The diver estimated that he was inside of the whale for 30 to 40 seconds before the whale surfaced and tossed him back into the ocean.

“I saw light, and he started throwing his head side to side, and the next thing I knew I was outside (in the water),” said Packard.

Packard’s crewmate, Josiah Mayo, witnessed the harrowing event and relayed the details to Packard’s sister. According to Mayo, he saw the whale surface and first thought that it was a great white shark.

“There was all this action at the top of the water,” Packard said Mayo told her. The whale then threw her brother back into the sea. Mayo made his way to the diver, picked him up, and sped to the pier where he was met by an ambulance and Packarrd was transported to a local hospital.

Packard was released from the hospital Friday afternoon and suffered no broken bones, only “a lot of soft tissue damage.”

Friday’s ordeal was the latest in a series of close calls for Packard who used to be an abalone diver on the West Coast where aggressive great white sharks have a history of attacking divers. In fact, Packard lost some friends to great white sharks. In another close call ten years ago, Packard was a passenger in a small plane that crashed in the Costa Rican jungle. The crash killed the pilot, co-pilot and one passenger. According to the Cape Cod Times, Packard suffered multiple serious injuries to his abdomen and upper body. Rescuers who found the remaining five survivors after two nights in the jungle said they wouldn’t have survived another night.

See an interview with Michael Packard below.