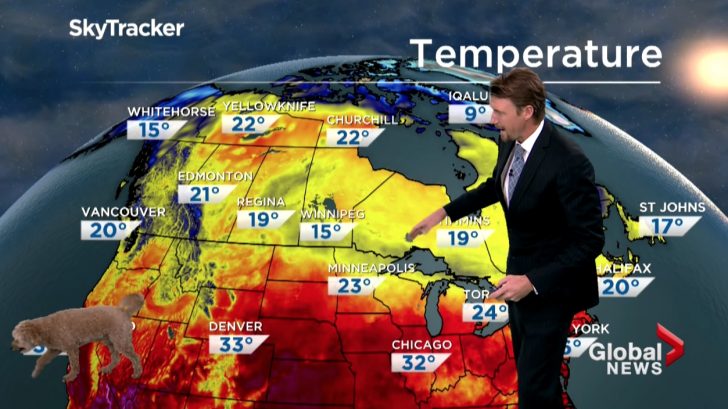 The footage showed Anthony speaking with a fellow newscaster before Storm walked onto the set and stood beneath him as if he was asking for a snack.

Anthony kept talking and giving the weather report and stepped off-camera to throw Storm a few treats to eat.

“Yes, Storm is in the buidling, getting some treats, walking on thin air…24 degrees by late tomorrow evening,” Anthony said in the Global News video.

Storm ate his snack and walked back over to his owner to stand near his feet to ask for another. Again, Anthony continued to give the weather report while throwing Storm another treat for him to eat.

He jumps up into the air to catch it on live TV and then searches the floor for any snacks that might have slipped by him. He then paces across the screen, watching Dad do the news, hoping he’ll get just one more treat.

Anthony ends the forecast by saying, “I do want to end on this Friday with the dog walking forecast.”