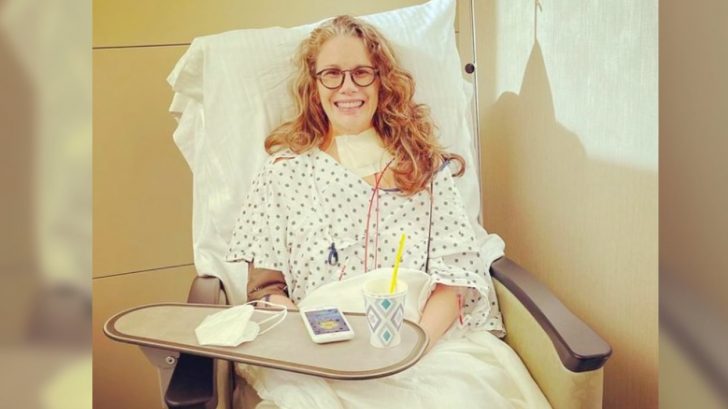 A few days ago, Little House on the Prairie star Melissa Gilbert took to Instagram to share a story with her followers. The 56-year-old actress has undergone three spinal fusion surgeries over the past few years, with her third surgery being in 2016.

Unfortunately, that surgery failed, and Gilbert was in need of a fourth.

Alongside a photo of her standing in line at the airport, she wrote:

“In 2016 I had my third spinal fusion surgery…I found out late last year that the fusion had failed, that the hardware was boring a hole in my C7 vertebra and I would need another surgery. In April of this year, I had a consultation with Dr Robert Bray…He agreed surgery was necessary and he felt I was a good candidate for an artificial disc instead of a fusion. Saving me from having to do more fusions down my spine in the future. The catch was that I had about six months. Double catch, hello COVID-19.“

Gilbert said she “waited as long as possible” before having the surgery, but the pain eventually became too much for her to handle:

“I’ve now reached the point where the pain is nearly constant and the fingers on my right hand are beginning to tingle,” she said.

Gilbert’s doctor is out in California, so she had to fly to him to be able to have her surgery. With the COVID-19 pandemic, Gilbert was taking all the precautions she could stay healthy for her surgery:

“So here I am, mask, glasses, gloves, shield, Clorox wiping every surface, ready to fly. I won’t know until I wake up if Dr Bray will have been able to give me the disc or will have had to re-fuse my neck,” she said.

Gilbert asked her followers to keep her in their prayers as she prepared for the surgery, which was scheduled for Thursday (November 19).

Thankfully, it seems all went well with the surgery, and Gilbert is now in recovery.

She updated her fans from the hospital via a post on Instagram. The post is accompanied by a photo of her propped up in a chair while wearing a hospital gown and smiling at the camera.

Gilbert shared the happy news that her doctor was able to give her the artificial disc he had talked about, rather than perform another spinal fusion surgery:

“Surgery was wildly successful! Dr Bray was able to remove all the old hardware, shave off bone spurs causing numbness in my right hand and, and, and, he was able to give me the artificial disc!!!“

She said from this point forward, she is now focusing “on recovery and remaining Covid free.”

Gilbert ended her post by thanking everyone for keeping her in their prayers as she prepared for and underwent surgery. You can read her full post about her experience below.

We’ll continue to pray for Gilbert as she recovers, and wish her a safe trip back home.