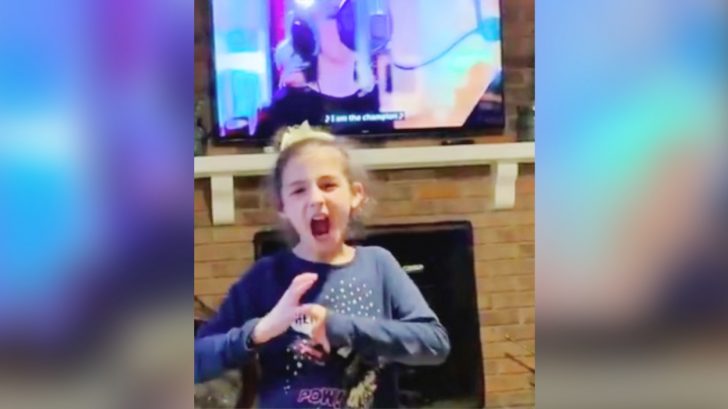 Carrie Underwood and Ludacris may have recorded their hit collaboration “The Champion” to celebrate the athletes at the 2018 Super Bowl and Winter Olympics, but it ended up inspiring everyday people as well, whether they were athletes or not.

In the immediate aftermath of “The Champion” being released, people flocked to social media to share how the song had made an impact on them. Some even illustrated it through video, recording workouts and dances to accompany the song.

Carrie saw many of these fans’ videos, and reacted to several of them on her social media accounts. As a result, these videos saw a surge in views and a bunch of additional recognition.

Now, well over a year after “The Champion” was released, it is continuing to inspire people of all ages. This is something that one little girl named Savannah proved when she filmed her own unique performance to “The Champion.”

Eight-year-old Savannah grew up learning American Sign Language in her home. Her family is deaf, and they use ASL to communicate with one another. Savannah is able to hear with the assistance of hearing aides, but still identifies as deaf, like her father, Richard.

Despite this, Savannah has a deep passion for music. She expressed that passion in a home video her dad filmed of her performing “The Champion,” using only ASL to do so.

Expressing “Emotions With Intensity” Through Song

“ASL involves body language and facial expressions,” Richard told The Baltimore Sun. “My daughter was able to share her emotions with intensity.”

No better words describe Savannah’s performance than those of her father. The girl’s performance is so captivating that you’ll find yourself glued to the screen as you watch her powerfully express each lyric.

Richard shared the video of Savannah’s performance in the hopes that people would be inspired by her rendition of “The Champion.” And a little part of him couldn’t help but wish that Carrie would be one of those people.

Even though Richard knew that Savannah’s performance was powerful, he never could have expected the response it received. In just a few days, the video generated nearly 77,000 views on Twitter, with people praising the young girl for her outstanding performance.

As of press time, the video hasn’t been seen by Carrie yet…or she at least hasn’t commented about it on social media. But if it keeps taking off like this, we have high hopes it will eventually catch Carrie’s attention!

Back in September, Carrie was amazed when a video of another talented little girl named Ansley made its way to her. The video showed Ansley belting out Carrie’s hit single “Cry Pretty,” and over a million people, including Carrie, watched it.

Ansley, this is amazing! Everybody keep your eyes out for this girl! https://t.co/jugU3i5oVT

You can catch the outstanding video of Ansley performing “Cry Pretty” below.

We hope that Savannah’s ASL rendition of “The Champion” ends up being recognized by Carrie as well. It’s a remarkable thing to watch!

Cry pretty… don’t mind the hair she shook loose lol she loves this song!! Please like and SHARE!!!