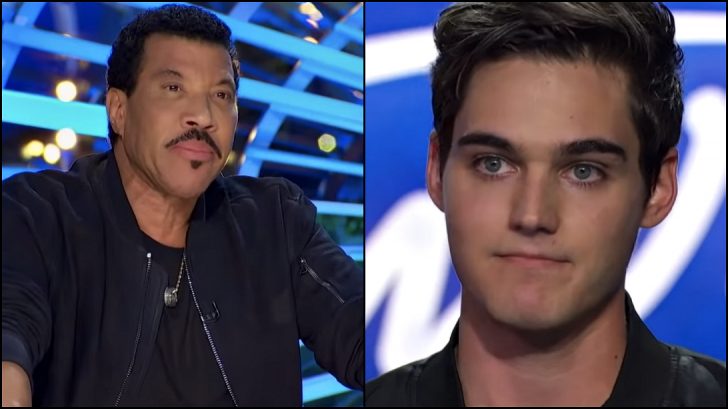 American Idol is back! The beloved reality singing competition has launched the careers of some of music’s biggest stars, including Carrie Underwood and Kelly Clarkson. And, even though Simon Cowell, one of the show’s original judges that predicted Carrie Underwood’s success, has moved on to other ventures, veteran pop star Lionel Richie has gladly taken his place.

Simon Cowell was known for his brutal honesty and sometimes heartless criticism. Even though Lionel Richie has shown to be a sweet, compassionate judge during the Idol reboot’s past two seasons, he showed a new side during an audition that aired during Sunday night’s season premiere (February 16).

24-year-old Nick Merico was one of the few Idol hopefuls lucky enough to earn a ticket to Hollywood last year. But, he dropped out and didn’t attend Hollywood week. As you can imagine, when Merico strutted into the audition room this year the judges were going to ask some questions.

Merico shared the reason behind his exit, saying, “Some personal things went down. I had to figure out a lot of things. And really take the last year as a boot camp.”

After being warned that he better not “ghost” them again, Merico took his place at the piano and sang “You Say” by Lauren Daigle.

“I just have this feeling that you think you’re too good for us,” Katy Perry said. “If you do go to Hollywood, be open to being molded and shaped and the whole thing. Because you do have a good chance, but there’s one thing that’s gonna get in the way…it’s gonna be your ego.”

Lionel Richie agreed with Perry, but took his criticism a bit further, saying, “Nick, we have a problem. A big problem, honestly.  Because I don’t like you. I gotta be honest with you, I don’t like you and for some weird reason it’s not sitting well with me. I don’t like your attitude and I don’t really think you’re gonna make it in Hollywood.”

Richie then asked Merico, “How do you feel right now?”

“Good. That’s exactly what I want you to feel like. Because I want you to understand what it feels like when people don’t adore you. You got that?” Richie replied.

Despite the harsh criticism, Merico earned another chances with a ticket to Hollywood week. See Nick Merico’s full 2020 audition below.

Watch Nick Merico’s 2019 audition in the clip below.