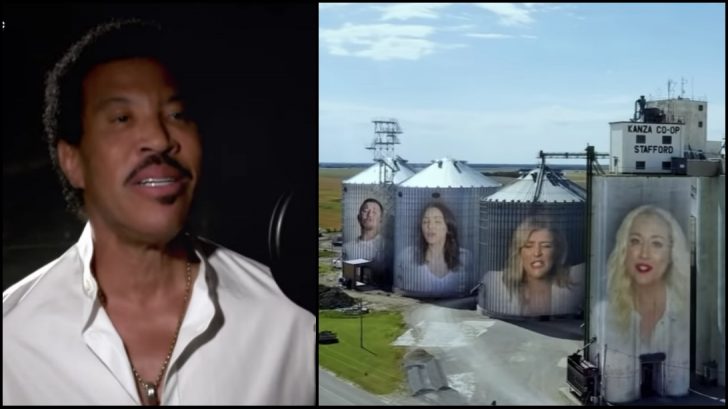 35 years after he penned and recorded the timeless anthem “We Are The World,” Lionel Richie revived the song with the help of some of our favorite American Idol contestants from years past. The collaboration aired during the Idol season 18 finale that aired on May 17, 2020.

Richie wrote the song in 1985 with the help of Michael Jackson in an effort to raise funds for Ethiopia’s famine relief. The result was one of the greatest anthems of unity ever written.

“We Are The World” was written in record time and completed the night before the recording session was to begin. With the help of Kenny Rogers and his Lion Share Recording Studio, Richie and Jackson recorded demo tracks for each performer that would be participating in the epic production of the song.

As a way to guarantee the success of “We Are The World,” the stars enlisted the help of 44 of their fellow artists from across all music genres, including, Willie Nelson, Kenny Rogers, Stevie Wonder, Bruce Springsteen, Ray Charles, Tina Turner, Diana Ross and more. The top-secret recording session started late one January night following the American Music Awards. The artists recorded until after sunrise the next morning. After it was released, “We Are The World” became the fastest selling pop single ever and raise more than $60 million for hunger relief.

The song has been remade a few times since its original release, including the 2010 remake to raise money to benefit the Haitian earthquake relief efforts and the rebuilding of Haiti.

But, the latest remake was special for a different reason…it served as a tribute to those affected by the current Covid-19 pandemic. Lionel Richie, who is a judge on the American Idol reboot, brought together some of the show’s most memorable contestants from this year and year’s past to join him, including Scotty McCreery, Kellie Pickler, Lauren Alaina, Gabby Barrett, and Laine Hardy, as well as his fellow judges Katy Perry and Luke Bryan.

The video features footage of popular American landmarks and places that are usually crowded with people but are now eerily still and quiet due to the pandemic such as the Las Vegas Strip, New York City’s Times Square, beaches, ballparks, and subways. The idols’ and judge’s faces were shown on the sides of buildings, canyons, mountains, and more as they sang.

Watch the powerful “We Are The World” remake in the video below.