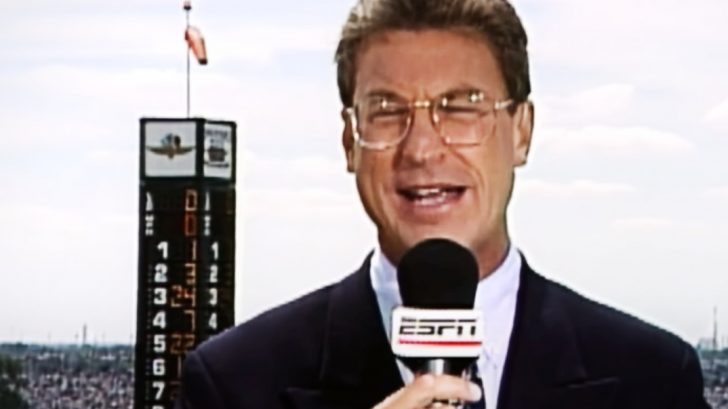 An Indiana native with an iconic voice, Bob Jenkins lead an illustrious career in sports broadcasting and became known as the “Voice” of the Indy 500.

Saddened to hear the passing of Bob Jenkins. You will be greatly missed by the entire racing family. Prayers to Bobs family. pic.twitter.com/HfTXVhWYPJ

Bob was a storied broadcaster with a true passion for motorsports. Every time he picked up a microphone or stepped in front of a camera, you could quickly tell how much the sport meant to him.

My guess is Bob Jenkins would have to wanted us to remember him with a smile on his face & I have many photos of just that. We lost a broadcast legend but are left with some great memories … pic.twitter.com/YEfADNfvcb

Often he was quoted summarizing his career as “I was just a race fan who got lucky.”

But luck had little to do with it. As a kid, he became obsessed with racing and watching the cars whiz around the track close to 200 mph. Just out of college, he snapped up a job as a radio news reporter and quickly began working toward sports broadcasting.

Bob Jenkins was & forever will be a legend – a friendly voice synonymous with auto racing.

To us, he was the voice & host of the USAC Thunder series, but most importantly, he was our friend.

His voice & memory will forever be with us. Never forgotten, we'll miss you, Bob. pic.twitter.com/aRRRzWhpQI

Jenkins would go on to become one of the very first ESPN anchors when it debuted in 1979. Over the next 25 years, he grew to become an iconic face and voice of various motorsports – easily earning a spot as host of SpeedWeek.

Throughout his tenure as a sports broadcaster, he worked with a multitude of networks for various races, series, and shows.

His most famous broadcasting moment came in 1992 during the year’s Indy 500 – when he called one of the closest finishes in the history of motorsports.

“Al Unser Jr. has the lead, one more turn to go. Here they come, coming to the finish line. Bob Jenkins, who’s going to win it?,” Bob Lamey said, handing the mic off.

Bob Jenkins was a true rare part of broadcasting in any sport – and a treasured part of the NASCAR and IndyCar families.

Our thoughts and prayers are with his family, friends, and fans during this difficult time.

Watch the Indianapolis Motor Speedway’s video tribute to him below.