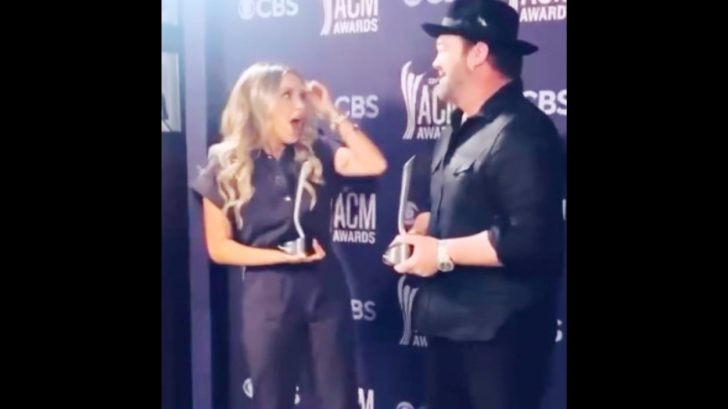 Every year, fans tune in to the ACM Awards to witness some outstanding collaborations. The ceremony’s stage serves as the setting for country artists to share some of their newest and most popular duets.

Since collaborations play such an important role in the country music world, the ACM also honors them through a dedicated award category…Music Event of the Year.

Here are the songs that earned a nod in the category in 2021:

The award was given out a few days before the ceremony, and went to “I Hope You’re Happy Now” by Carly Pearce and Lee Brice! The duo was surprised with the news during an interview.

They shared a video on social media that shows how they reacted in that moment. Pearce captioned the clip, “Is this even real life?” while Brice said, “I’m over the moon on winning this award…“

“I Hope You’re Happy Now” was one of the biggest hits in country music in 2020. The song was actually released in October 2019, but came to prominence in 2020 as it climbed to the #1 spot on the Country Airplay chart in June 2020. It also landed at the 27th position on the all-genre Billboard Hot 100.

By the end of 2020, the song ranked at the sixth spot on the year-end Country Airplay chart. It has since been certified Platinum by the RIAA.

Now, “I Hope You’re Happy Now” is an ACM Award-winning tune. Pearce and Brice proved to be a good team…congratulations to them!

Watch the official music video for “I Hope You’re Happy Now” below to celebrate its win!